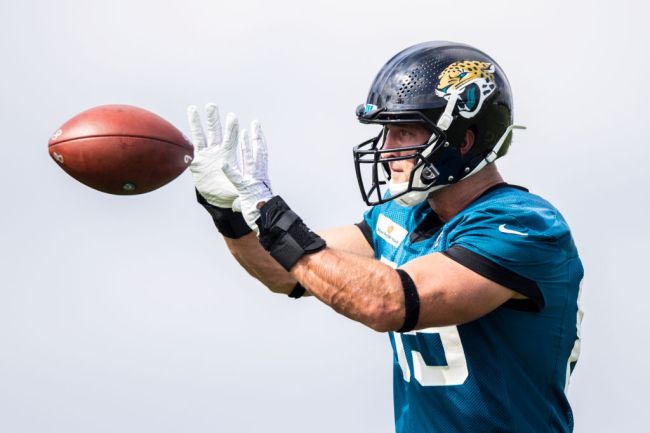 Tim Tebow caught a touchdown pass from Trevor Lawrence during Jaguars training camp on Friday. That’s a factual statement. Most didn’t think we’d see it happen, but it actually did.

To be honest, the entire play sequence was impressive too. Lawrence didn’t have any actual pressure, but for him to roll out of the pocket to his weak side, fire a dime to the back of the end zone, and Tebow make the diving catch made for a pretty legitimate play.

You're about to watch Trevor Lawrence throw a TD pass to Tim Tebow.

While it’s only a touchdown catch during the first week of training camp, this isn’t something most of us predicted we’d see. It was assumed that Tebow wouldn’t even make it to camp, and he could still be cut prior to any actual game-action, but you have to credit the man for proving the world wrong.

When Tebow signed with Jacksonville back in May, the whole situation felt like nothing more than a PR move to get the buzz going in Jacksonville. It’s still too early to tell if that is all this will turn out to be, but if it was, mission accomplished.

Tebow is still making headlines and taking a bit of the spotlight off of his rookie quarterback.

At the end of the day we’re talking about a 33-year-old man that’s been out of the league for quite some time playing a position he’s never played. Every odd imaginable is stacked against Tebow, but maybe he’s still got a bit of magic in him and does end up making the Jags’ 53-man roster.

Jacksonville host Cleveland in its first preseason game on August 14.