A.J. Brown Admits Playing Baseball Is On His Mind, Jokes He’ll Be Better Than Michael Jordan 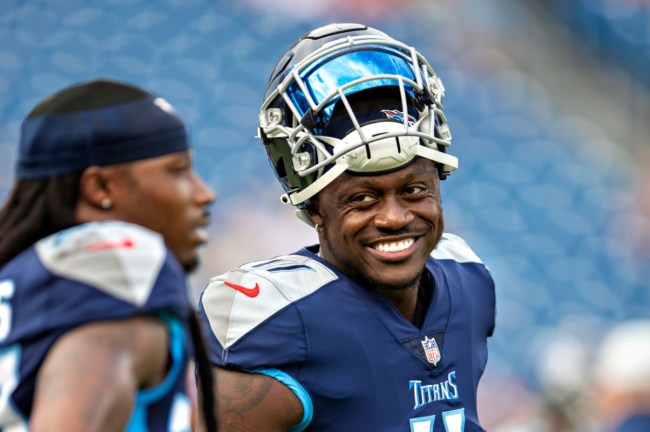 A.J. Brown and the Titans were eliminated from the playoffs less than a week ago, but based on the wide receiver’s latest tweets he’s already getting a little restless sitting at home.

During his high school days, Brown was a standout baseball player and was actually drafted by the San Diego Padres in the 19th round of the 2016 MLB Draft. Brown, along with Arizona quarterback Kyler Murray, played in both the Under Armour All-Star baseball and football games as high schoolers.

While scrolling Twitter on Wednesday, Brown came across a tweet about Bo Jackson playing in both the NFL and MLB. This got Brown to thinking ‘what if’ as he admitted he sometimes thinks about playing both sports. He even mentioned the Padres in the tweet asking for a workout.

Sometimes i think about playing both sports again 🤔@Padres all I need is a workout. I still got 😎 https://t.co/1PRo7ffAWm

He wasn’t done there, either, Brown also promised that he’d be a better baseball player than Michael Jordan was.

I promise I will do better than Michael Jordan in baseball 🤣

During his first two years at Ole Miss, Brown spent with the Padres organization. Fast forward a bit later and the rest is history as the Titans drafted him in the second round of the 2019 NFL Draft.

A.J. Brown Has Talked About Playing Baseball In The Past

This isn’t the first time Brown has mentioned playing both sports at the professional level.

Back in 2000, Brown told John Glennon of The Athletic that part of him still wanted to play both sports even after he knew he was about to be drafted to the NFL.

“My junior year in college. I knew I was going to leave (for the NFL) and a part of me still wanted to play both,” Brown explained. “But I just didn’t know how an NFL team would take that. I didn’t want to scare nobody away, either. Like Mike Vrabel would probably have a heart attack if I said I wanted to play baseball in the spring.”

Brown sticking with football has worked out pretty well for him. He was named to the Pro Bowl in 2020 and was selected to the PFWA All-Rookie Team after his first season in the NFL.

Related: AJ Brown Opens Up About His Mental Health And How Elijah Moore Helped Him Amid Suicidal Thoughts