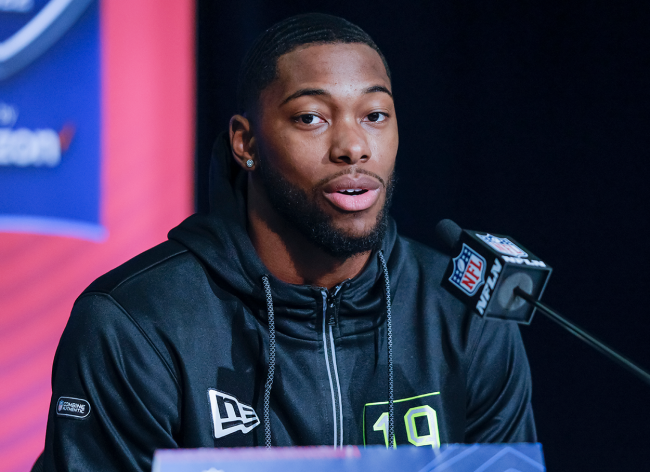 The Tennessee Titans got mandatory minicamp underway on Tuesday and star running back Derrick Henry was in the building. His rookie backfieldmate was astonished at his size.

Hassan Haskins, who was drafted out of Michigan in the fourth round of the 2022 NFL Draft, stands 6-foot-1, 220 pounds. That’s a sizable running back, even for the NFL.

However, when standing next to Henry, he is dwarfed. The former Heisman Trophy winner stands 6-foot-3, 247 pounds.

Henry, who is coming off of an injury-shortened season, missed a large chunk of 2021 with a Jones fracture in his foot. He ended up coming back for one game in the playoffs, but was admittedly not at 100%, although he was close.

Now that he has had the entire offseason to get back to full strength and get in the necessary rehabilitation work and preseason prep, Henry looks as explosive as ever. He was in pads on a hot Tuesday in Nashville and didn’t miss a beat.

Henry was catching passes, cutting off of both feet, moving well in the bags, shuffling well during footwork drills and bursting through the imaginary line of scrimmage.

After the day was over, Haskins was asked about his new backfield counterpart. Although the former Wolverine will be playing second fiddle to Henry, he is expected to get a significant share of touches.

Hassan Haskins is astonished with the sheer size of Derrick Henry.

Regardless of what his workload looks like, he couldn’t get over how big he is and had a hilarious first impression.

If Henry is back at full strength, it is not a good sign for the rest of the league.