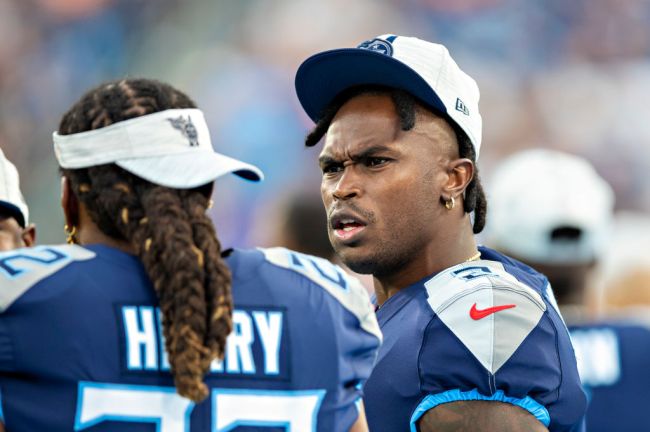 Julio Jones’ debut for the Tennessee Titans could have gone better on Sunday. Not only were the Titans embarrassed on their own turf by the Arizona Cardinals, the biggest impact Jones had on the game came when he was penalized, which head coach Mike Vrabel was sure to call him out for.

Vrabel is one of the more candid head coaches in the NFL and he let that authenticity shine during his Monday presser following his team’s 38-13 loss to the Cardinals.

The 46-year-old was asked about Jones’ personal foul call that occurred in the first quarter. Already down 10-0, the Titans were trying to put together a drive with seven minutes left in the opening frame. Derrick Henry picked up seven yards on a second down carry to give Tennessee a third down and one situation, but Jones was whistled for unnecessary roughness which killed any ounce of momentum the Titans were trying to build.

Vrabel said that Jones’ personal foul falls in the category of “doing dumb sh-t that hurts the team, right there, in bold letters.”

Mike Vrabel was rather critical of Julio Jones' personal foul call that resulted in a 3rd & 1 turning into 3rd & 16. #Titans pic.twitter.com/Bh8m60skuI

Jones finished the game with just three catches for 29 yards. He certainly wasn’t the only sore spot for the Titans on Sunday, however. Tennessee’s offensive line was manhandled and Derrick Henry finished the contest with a whopping 58 rushing yards on 17 carries.