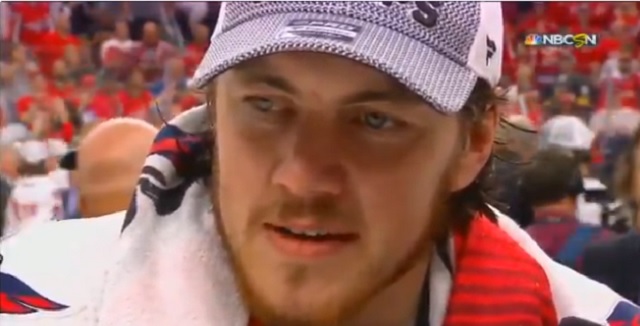 For the past few years, Washington Capitals star TJ Oshie has been open about his father’s battle with Alzheimer’s disease in order to raise awareness of the debilitating disease in hopes that some day a cure can be found.

“We have nothing right now as far as getting rid of it. With all the medicines and all the doctors in the world, I think it’s something that hopefully we’ll be able to stop – and get rid of sooner than later,” Oshie told ESPN. “So that’s why we talk about it, that’s why we’re open about it. Maybe not soon enough for my dad or for me, if that happens to be the case eventually down the road, but hopefully for my kids and my grandkids.”

Tonight, the Washington Capitals won the Stanley Cup final after beating the Vegas Golden Knights 4-3 in game 5. After the game, NBC Sports caught up with Oshie who gave an incredibly touching tribute to his father.

“My dad, he doesn’t remember a lot of stuff these days. He remembers enough. But I’ll tell you what, this one will stick with him forever. You can guarantee that.”

TJ Oshie talking about his dad wrecked me pic.twitter.com/2A2hjmx8TE

Update: Oshie’s dad went on to lift the Stanley Cup trophy with his son on the ice.

T.J. Oshie got to lift the Stanley Cup with his dad, who has Alzheimer’s. What a moment. pic.twitter.com/BxEeASlMot