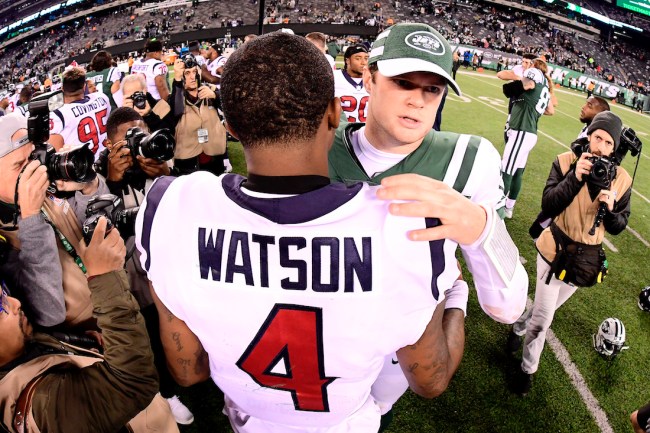 I have total respect for Todd McShay because he’s really, really good at his job as an NFL Draft analyst, but, wow, the ESPN personality really went out on a limb while discussing all the rumors surrounding Deshaun Watson. The unhappy Texans quarterback reportedly asked Houston for a trade officially on Thursday, which has further sparked debate about which team will land the superstar.

One of the teams most linked to Watson happens to be the New York Jets, who have an incumbent starter in Sam Darnold — with whom they drafted No. 3 overall in the 2018 NFL Draft — but who hasn’t exactly lived up to the expectations. Whether it was fighting injuries, battling mono (remember that?), or seeing ghosts out there on the field, Darnold just hasn’t worked out in the Big Apple. And since the Jets hold the No. 2 overall pick in this year’s NFL Draft, many think Watson can be had by New York.

But one person who doesn’t seem to agree with that notion is Todd McShay. It’s not that he doesn’t think Houston and the Jets can’t get a deal done, it’s that he doesn’t think the Jets should even explore such an option, saying the move doesn’t make sense for Gang Green, and that Watson might only be “slightly better” than Darnold. I’m speechless.

To me, it just doesn’t make sense. I don’t think you’re getting a huge upgrade. If I’m the Jets sitting at No. 2 (in the draft) I’m saying, ‘I love Deshaun, he’s a really good player, I might even think he’s slightly better than Sam.’

Just listen to this please. I beg you.

Todd McShay doesn’t think the #Jets would be getting “a huge upgrade” with Deshaun Watson.

I was originally going to drop some stats in here to prove why Todd McShay is absolutely, unequivocally wrong in comparing Watson to Darnold, but, honestly, it was just going to be a waste of my time. That’s because everybody knows the two are in different classes, with Darnold hovering around the “Just Trying Not To Be A Bust” category, and Watson ascending into the “Top-5 Quarterbacks In The League” category. It’s honestly a waste of breath even talking about these two in the same sentence — and plenty of people on Twitter agreed, tossing out their reactions to McShay’s disastrous take.

it is the worst take in the history of football. McShay needs to be suspended or fired for incompetence

Give me what Todd is smokin’!! pic.twitter.com/DXoroWC1gi

Wtf is he on lol I know he is capping 😂😭

Cocaine is a hullava drug

Wow, these “draft gurus” are something else 😂

As mentioned earlier, I’ve got great respect for what Todd McShay does leading up to the NFL Draft, but he might want to take a timeout from sharing his opinions about current starting quarterbacks like Deshaun Watson and Sam Darnold, because they’re not even close to being in the same class. In fact, if I’m the New York Jets, I offer a load of draft picks to acquire Watson and don’t even think twice about it.