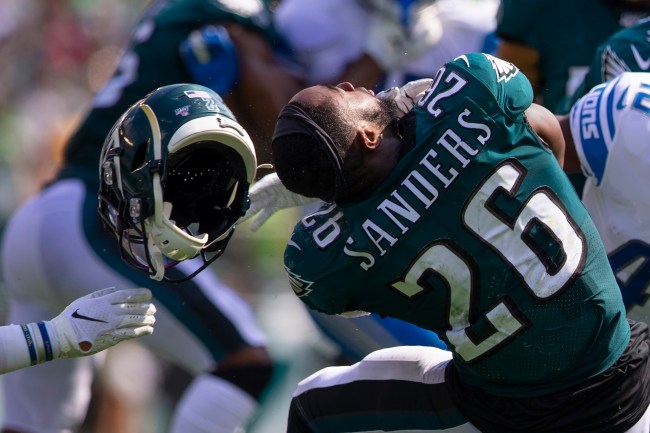 Philadelphia Eagles fans had plenty of reasons to be angry last weekend. For starters, their team lost at home to the Detroit Lions, a team that’s been nothing short of atrocious on the road for the past several seasons.

Then there were the refs who did nothing to help the Philadelphia Eagles with their officiating. Case in point was a late second-quarter kick return from the Eagles’ Miles Sanders where the referee missed a BLATANT facemask from the Detroit Lions‘ Miles Killebrew who ripped Sanders’ helmet off and damn near snapped the dude’s neck in half.

If you missed that play from Sunday, here it is. I can’t understand how any NFL referee could miss this egregious penalty that could’ve very well led to serious bodily harm.

This was NOT called a facemask penalty.

The Detroit Lion who committed it was actually laughing on the sideline that he got away with it.

Fire every single one of your officials into the sun, @NFLOfficiating, you are ruining a great sport. pic.twitter.com/ZmGUqG6Eu0

The amount of things that could have happened to Miles Sanders’ neck and head here…for there to be no penalty is inexcusable. pic.twitter.com/zmkfaNvywd

The ref was literally looking right at the Lions player rip Miles Sanders’ helmet off via his facemask. No penalty. What the fuck is that? #Eagles

According to Radio.com, the back judge who was in position to make that call was Todd Prukop, a man who is no longer welcome in the city of New Orleans after completely boning the Saints in last year’s NFC Championship game.

He’s the man who missed the easiest and most blatant pass interference call of last season, the one that would’ve ended the game and handed the Saints the Win…and would’ve possibly led to a much more exciting Super Bowl than the 13-3 Patriots-Rams game we were all forced to endure.

Here’s the rundown from Radio.com:

The back judge who could have made the call was Todd Prukop — whom fans may remember from last year’s NFC Championship Game when he missed a blatant defensive pass interference that would have clinched the game for the New Orleans Saints.
Needless to say, Philadelphia was incensed over the non-call on Monday morning, and 94 WIP’s Angelo Cataldi ripped into Prukop specifically.

“How do you miss that unless you are blind?” Cataldi asks. “What if I told you the guy who missed that, the back judge on that crew, is the same guy who missed the pass interference in the New Orleans game playoffs last year? Todd Prukop. That guy is the worst official in American sports!
“After he was so bad on the play they had to rewrite the rule allow a challenge on pass interference. They kept him in on a crew. (via)

Despite the NFL’s officiating being under constant scrutiny it does seem like it’s a job that is harder to get fired from than a USPS employee who drop-kicked your ‘fragile glass’ package directly into your front door and was caught on camera doing so.

The job security these guys have seems unwarranted.

In any other field, if you make mistakes that can or did lead to someone getting injured then you would be fired. Likewise, if you repeatedly make enormous mistakes that alter the entire outcome of an event when your ONLY job is to ensure that event follows the rules and goes according to plan, then you should be fired (in theory).

But not in the NFL, at least not yet.