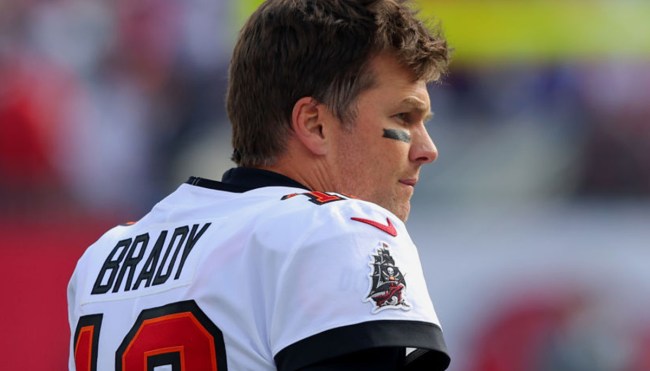 Tom Brady may be questioning his decision to come out of retirement.

The star passer chose to hang up the cleats following the 2021 season, which ended in the NFC Divisional Round with a loss to eventual Super Bowl champion Los Angeles. That retirement didn’t last long, as Brady announced his plan to return less than two months later.

No one doubts Brady’s ability despite his 44-year-old age. The signal caller led the league in passing last year, posting one of his top campaigns as a pro. He racked up a career high in passing yards, led the NFL in touchdowns, and finished second in the MVP voting.

But after seeing some offseason workout videos from a future opponent, Brady, himself, is wondering if he’s made the right choice.

Unsurprisingly, this player plays for the team that ended Brady’s season a year ago. And he’s the most dominant defensive football player in the league.

You’ve probably already guessed it by now, but that man is Aaron Donald. The superstar defender is fresh off of his seventh first-team All-Pro season in eight years. He ranked third in the DPOY voting. And he just got a lot richer after landing a massive contract extension with the Rams.

Donald harassed Brady in that playoff matchup in 2021, sacking him once and putting him on the ground a couple more times throughout the contest. It doesn’t look like he’s slowing down either after seeing some of his offseason workout videos.

Those videos have apparently caught Brady’s attention over the last few months.

Tom Brady had the following to say about Donald while making an appearance on the Dan Patrick Show.

“I see Aaron Donald work out on Instagram, and I’m like, damn, maybe I should’ve stayed retired because he’s a beast.”

There’s no bigger compliment coming from the greatest NFL passer of all time. Brady will see Donald in action as his Bucs take on Los Angeles in the first week of November. He’ll hope to avenge that postseason loss from last year.

If things work out similarly to last season, both of these teams will find themselves in the playoffs, and they might have to go through one another to reach the Super Bowl.