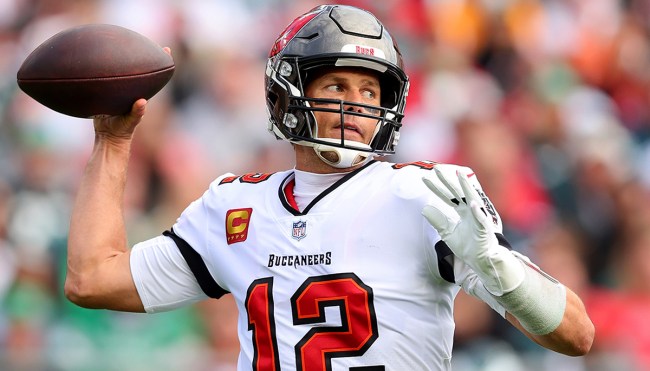 Back in October, Tom Brady connected with Mike Evans to become the first quarterback to throw 600 touchdowns in the regular season over the course of his NFL career.

That catch marked the start of an interesting saga, as Evans was apparently unaware of the milestone and opted to hand the ball to someone in the crowd. The fan willingly surrendered the piece of history before leaving the stadium, but after realizing he’d potentially missed out on a massive payday by doing so, he lobbied for a bit of compensation and eventually received a pretty solid consolation prize.

Tampa Bay was prepared to prevent a similar situation from unfolding when Brady was on the verge of surpassing another milestone a couple of months later, as a staffer scrambled to secure the ball Breshad Perriman carried across the goal line for what was Brady’s 700th TD when the postseason was added to the equation.

The #Bucs had a staffer ready to run in to get Tom Brady’s 700th career TD ball as soon as it happened.

Immediately after Perriman scored, someone was there to get the ball.

However, there was no one on hand to prevent Evans from giving a gift to yet another lucky fan in the closing minutes of Tampa Bay’s playoff loss to the Rams following what would turn out to be the final touchdown pass of the legendary quarterback’s career.

It was initially unclear who’d managed to get their hands on the ball in the wake of Brady’s retirement, but according to ESPN, the spectator has come forward and connected with Lelands for an auction that’s slated to kick off on Super Bowl Sunday.

The unidentified man spoke to the outlet about what went down after he found himself in possession of the ball after deciding to buy tickets to the first Buccaneers game he ever attended, saying:

“We stayed for the whole game and I just kind of held it like a baby and we watched them come back and lose. We stood around for a while while the players walked off the field, then I tucked it in my jacket and we just walked out like normal. Nobody came up to us or anything.”

That turned out to be a pretty shrewd move, as a representative for the auction house estimates the ball will fetch at least $1 million when everything is said and done.