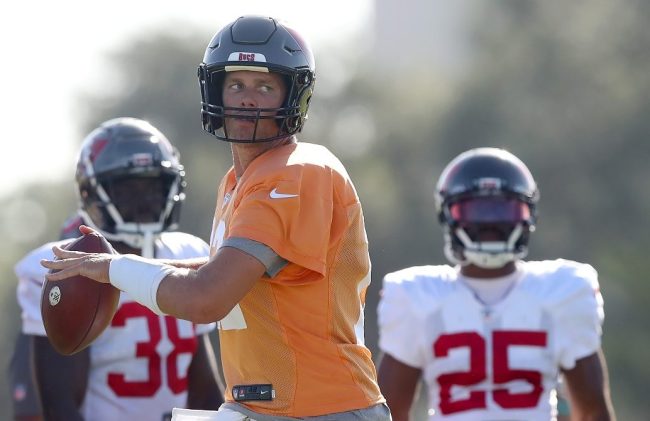 Tom Brady is back with the NFL season kicking off soon. The Tampa Bay Buccaneers are set up nicely to make a deep playoff run, despite the offensive line being a potential concern. However, there have been reports of the future Hall of Famer looking miserable, but now they’re saying he’s looking good. It sounds confusing, but trust us, it’ll all make sense.

As previously mentioned, reports came about Brady looking miserable, per Ben Volin. Many were confused by the initial reporting and Alex Kennedy decided to stop messing around and ask Greg Auman, a Buccaneers Insider for The Athletic, what was going on.

@gregauman There was a report that Brady “looked miserable” at the last practice before his absence. Did you get that sense today?

Auman did the Lord’s work and cleared the air for football fans alike. Greg Auman claims that Tom Brady looks great on the field and is even taking extra reps to make up for some of the time lost. So, it sounds the Brady haters (how do they even exist anymore?) are taking another “L” on this one. That’s great news for the Buccaneers, as their quarterback prepares for the upcoming season and is looking sharp in practice.

We're a good distance from the far side of the field where the QBs are, but Brady seemed very much back to normal today. If anything, took more reps than usual to get back into the rhythm of practice. Other than that, you wouldn't know he'd been gone, watching him today. https://t.co/hRKOP8BlIZ

In case anyone needs some reassurance though, Auman goes the extra mile to come up with a reason for the miserable rumors. Tom Brady asks for the absolute best, so Greg Auman claims Brady could have thrown a “single bad throw” as a potential reason why he looked miserable. Additionally, practicing in Florida in the middle of the summer sounds dreadful. The humidity makes me feel miserable anytime I go outside to check the mail. So I get it, Tom!

Sometimes all it takes for Brady to be miserable at practice is a single bad throw, a missed assignment. You take that kind of low margin for error and mix in 90-degree heat and he doesn't always look happy out there. https://t.co/tnjBT45Epg

Buccaneers fans need not worry about Tom Brady. He’ll be ready to go at the start of the season. At 45 years old and seven Super Bowl titles under his belt, is there really any reason to doubt this man?