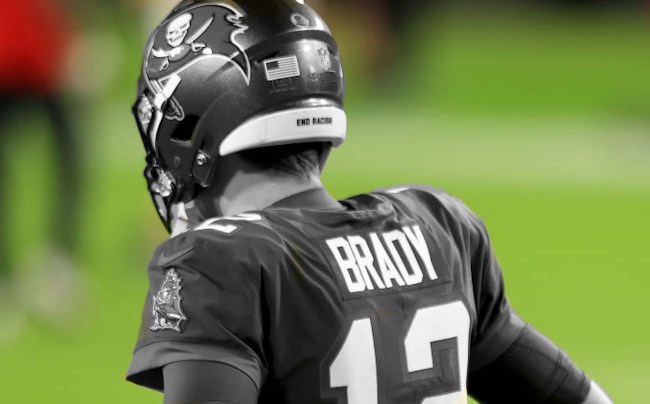 This is who Tom Brady has always been.

As a stereotypically miserable New York Jets fan, I’ve quite literally been waiting twenty years for Tom Brady to ride off into the sunset of retirement. The dude has been dominating the AFC East and the NFL for two decades and it’s time for the next generation. The league is ready to move on, especially with the likes of Kyler Murray and Joe Burron and, of course, Patrick Mahomes waiting in the wings.

That said, if Brady — who is unquestionably the greatest quarterback of all-time — wants to keep sticking around for another few years to tarnish the public’s opinion of both his personality and his legacy, then please Tom, by all means, stick around! As Cap’s slam piece said in Captain America: The Winter Soldier, “even if the whole world is telling you to move, it is your duty to plant yourself like a tree, look them in the eye, and say, ‘no, *you* move’.” And that appears to be exactly what Tom Brady is doing as he tosses interceptions all over the park and snubs quarterbacks of postgame handshakes. Plant that tree, TB!

That’s right, in case you went to bed early last night and missed it, Tom Brady and the Tampa Bay Bucs lost at home to the Los Angeles Rams by a score of 27-24 (largely due to some ghastly Brady INTs), and just as he did after losing to Nick Foles’ Chicago Bears earlier in the season, the 43-year-old Tom Brady walked off the field without taking part in the postgame pleasantries. Don’t worry, though, as he was back at center field dapping up Aaron Rodgers when the Bucs laid the smackdown on the Packers just a week later. Put it this way: if your son or daughter walked off the field with this level of poor sportsmanship, you probably wouldn’t take them to Wendy’s on the way home.

Brady’s latest snub, this time of Jared Goff, drew the ire of both NFL legends and fans alike, as even Shannon Sharpe took to Twitter to call out the Tampa Bay Bucs QB.

I guess Brady doesn’t know Goff well enough to shake his hand after losing. Yet, he knows every qb after he wins. Brady is full of what the elephant left on the show ground. His attitude is bulljive and it’s time to call his A** out on it. 😤😤😤

Goff heads to the middle of the field looking for Brady, who’s off to the locker room pic.twitter.com/G4cLCQA6La

Jared Goff and Tom Brady after the Super Bowl. Brady loses a regular season game and pouts all the way to the locker room with out shaking Goffs hand. Brady the goat but he’s also a bitch. pic.twitter.com/rA8C6fbibC

The thing is, though, Tom Brady has *always* been this way. It’s not his personality that’s changed, it’s that the situations that awaken his inner cry baby have been occurring more frequently. He’s a front runner, a circumstantial sportsman. The perfect tangential example of this spinelessness can be found back in 2016 when Donald Trump was first running for President. Brady, a personal friend of Trump’s, famously and proudly put one of his “Make America Great Again” hats in his locker, grinning his way through his interview. But then, a few days later when journalists further asked him about it, not only did he not answer the question, but he abruptly ended the interview and walked off the podium. He himself, and he alone, sparked the public conversation about his relationship with the then future-President, but when it came time to answer for it, similar to his recent postgame handshakes, he just walked away. You need to be able to reap what you sow, even if what you’ve sowed isn’t what you want. Time to pay the piper, as it were.