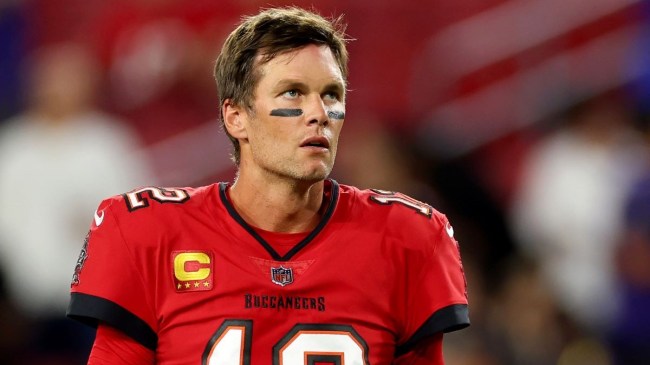 Tom Brady’s no-good, very bad 2022 NFL season continued on Thursday night. Brady went 26-of-44 for 325 yards and a touchdown, but the Tampa Bay Buccaneers fell to the Baltimore Ravens, 27-22.

It’s the first time in Brady’s entire NFL career that he’s two games under .500. Which is even more insane when you consider this is his 23rd NFL season. But the seven-time Super Bowl champ isn’t entirely without blame. Brady has just one interception through eight games. But he’s also thrown for just nine touchdowns in that span as the Bucs’ offense has sputtered.

The Bucs still have a fantastic shot of winning the lowly NFC South. So Brady could be playing well into the playoffs if Tampa Bay turns things around.

But if he doesn’t, it appears Brady’s next steps may already be in place.

Brady may not end up playing in Super Bowl 57 in February. But he could still be a big part of the show. The future Hall of Fame QB signed a 10-year, $375 million deal with FOX to serve as a broadcaster after his playing career. Now it appears the broadcast giant is hoping to cash in on its investment ASAP.

“If he’s not playing in the game, I would expect Brady to be part of Fox’s Super Bowl coverage,” said a source. “Definitely. I would be very surprised if he isn’t.”

Fox is already drawing up contingency plans on how to feature the 45-year-old Brady in its Super Bowl coverage from Glendale, Arizona, on Feb. 12, 2023, said sources.

The most ambitious strategy calls for the seven-time Super Bowl champ to be the third man in on a three-person broadcast booth with Fox’s No. 1 NFL team of Greg Olsen and Kevin Burkhardt. – via Front Office Sports

Brady appears ready to make an impact on Super Bowl 57, one way or another.