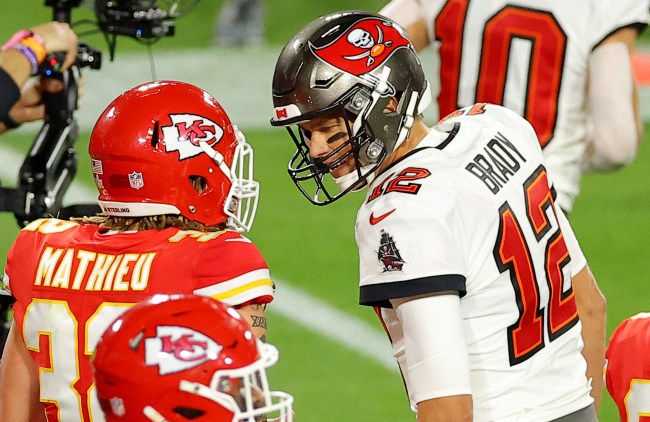 Football should be treated like Vegas, what happens in between the lines should stay there and one should always take a long hot shower afterwards to kill off the grime.

Tom Brady and Tyrann Mathieu’s provocative jawing at one another during Super Bowl LV has become one of the hottest post-game storylines, complete with a tweet-and-delete spillage that brought the altercation online.

Tom Brady told Tyrann Mathieu he was coming for him, went after him, then reminded him.

ESPN is now reporting that immediately after the Bucs convincing 31-9 win over the Chiefs, Brady texted a “lengthy apology” to the two-time Pro Bowler for dressing him down in front of tens of millions of people, while also praising him for his character and leadership abilities.

Brady apologized to Mathieu for losing his composure in the moment of the game, of which Mathieu said, “I’ve never really seen that side of him.”

…Brady told Mathieu he’d watched him since his days at LSU, considered him a “class act” and a “great leader,” the source said. Brady said he wished he could have apologized in person, according to the source.

The source added that Brady said his outbursts in an emotional moment were in no way a reflection on his feelings toward Mathieu, whom he spoke of highly throughout the week leading up to the game.

A nice gesture by Brady to bury the hatchet, but I can’t help but think Honey Badger’s phone wouldn’t have buzzed at all if the score had been flipped.