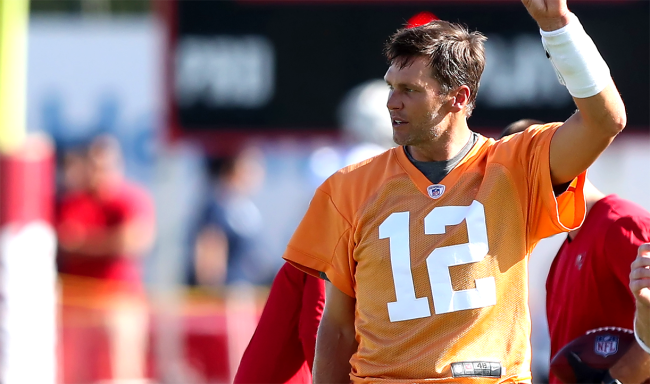 Like it or not, Tom Brady has evolved into one of the more entertaining athletes on social media.

Despite having what appears to be a rather vanilla personality, the marketing team he has assembled behind the scenes has not only made him self-deprecating and therefore somewhat likeable, they’ve made him pretty dang funny.

How much of that humor is his and how much of it is manufactured is certainly debatable, but you can’t argue with the results.

The future Hall of Famer, from day one, has put together a social media profile that compliments and promotes his brand better than most professional athletes.

A perfect example of this TB12 marketing synergy was on display Thursday when Tom Brady took to Twitter with a video announcing that his Brady brand underwear had just restocked.

“Alright, so the Brady underwear just restocked,” Tom says to start the video.

“I’ve been posting a bunch of pictures. And these guys… pretty ripped, pretty jacked, taking it to new level.

“So for the rest of us, us normal looking guys, I came up with the Brady brand mirror picture starter pack. That’s what we’re gonna call it.

“You only need two things,” Brady explains. “So check out the next couple slides. It’s pretty simple.”

The first slide with a photo of a pair underwear reads: “Step 1: Take your brady underwear.”

The second slide with a photo of a pair of socks then reads: “Step 2: Take your sock (you’ll only need one of them here).”

The third and final slide, showing a sock above a pair of underwear, reads: “Step 3: insert.”

Brady then smiles into the camera, looks down at his crotch, and says, “Yep. Works.”

Reactions to the video were very comical with many fans roasting Brady and making jokes at his expense.

Plus, of course, it achieved Brady’s goal of getting people to talk about the fact that his underwear is indeed back in stock. Genius.

I didn’t have Tom doing dick tweets on my bingo card https://t.co/tVKP9Q3Z4e

Somebody take this man’s social media away pls https://t.co/T0BMBgR4r9

This account’s officially gone off the rails 😳🤯 https://t.co/Ufc9piiEn2