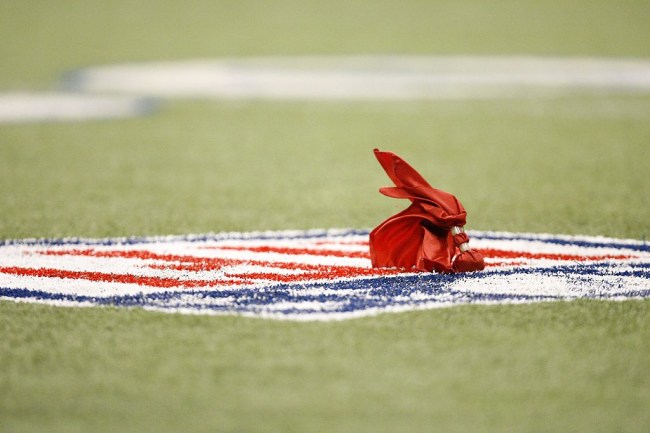 During last year’s NFC Championship Game, the refs screwed the Saints harder than Vince McMahon screwed Bret Hart in Montreal after they declined to throw a penalty flag following what appeared to be one of the more blatant pass interference infractions in the history of football.

Unfortunately, New Orleans had no recourse to right this wrong, and while their fans would express their displeasure by filing lawsuits and making the wise decision to party in the streets instead of watching the Super Bowl the Saints probably should have been playing in, no justice was ultimately served.

We’d eventually learn Roger Goodell had the theoretical power to overturn the final result of the game but he ultimately declined to do so, which left people wondering what the league would do to rectify this wrong.

We found out the answer in June when the NFL announced it would be instituting a new rule that would give coaches the power to throw the challenge flag when they felt a pass interference call was botched, and while it appeared like a solid solution in theory, things haven’t exactly played out the way most people hoped.

So far, officials have seemed incredibly unwilling to reverse course as fall as calls of this nature are concerned, as illustrated by a ruling concerning T.Y. Hilton and another very questionable non-reversal during the Patriots-Giants game last month.

On Monday night, the Giants found themselves on the receiving end of another no-call that wasn’t overturned on review for reasons I can’t really comprehend.

On Tuesday, Tony Dungy weighed in and suggested coaches might as well not even bother throwing the challenge flag anymore based on the abysmal success rate (which Total Pro Sports says is under 10 percent).

I don’t necessarily know what the solution here is but it’s very clear the NFL has to do something to figure its shit out because the league is really just embarrassing itself at this point.