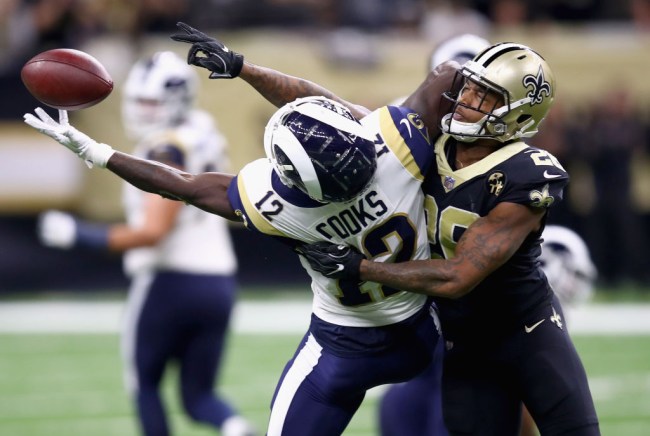 January 20, 2019 is a day that will live in infamy for fans of the New Orleans Saints, as it was on that date that the No Call Heard Around the World essentially cost them the chance to face off against the Patriots in Super Bowl LIII (and cost fans a chance to watch what could have actually been an entertaining championship game).

The sequence on the #Saints sideline after the #Rams no-call pass interference that should've ended the game is heart wrenching. pic.twitter.com/mYJ2smOObZ

Saints fans didn’t exactly handle the situation too well, and after the lawsuit they filed against the NFL failed to go anywhere, a number of supporters decided to boycott the Super Bowl entirely (and had a pretty damn good time doing so).

Roger Goodell technically had the authority to overturn the call (or lack thereof) but declined to do so. However, as a result of the fallout, the league announced it would address the situation in the offseason by reevaluating its pass interference rules.

At first glance, it seemed like a simple fix: give coaches the option to throw the challenge flag when they feel they’ve been wronged. However, things got increasingly convoluted as negotiations progressed and it was unsure how things would look heading into next season.

Now, according to ESPN, the league has officially finalized its new stance on the issue. Here’s what things will look like next year:

[C]oaches will be able to challenge pass interference calls or no-calls up until the two-minute warning of either half. In the final two minutes of each half and in overtime, on-site replay officials will be responsible for stopping the game to review pass interference, as they are for all other reviewable plays.

Is it an improvement? Probably.

With that said, there’s no telling what criteria the on-site officials in question will use to determine when to stop play if coaches have no say in the matter nor does it solve the much-discussed issue of what will happen if a replay is (or isn’t) initiated on a Hail Mary—a play where refs essentially act like pass interference doesn’t exist.

I guess only time will tell if these rules change things for the better but I’m probably going to start making popcorn now to prepare for the inevitable drama.