Tony Romo Predicts Who Will Be Steelers’ Starting QB, What’s Next For Jimmy Garoppolo 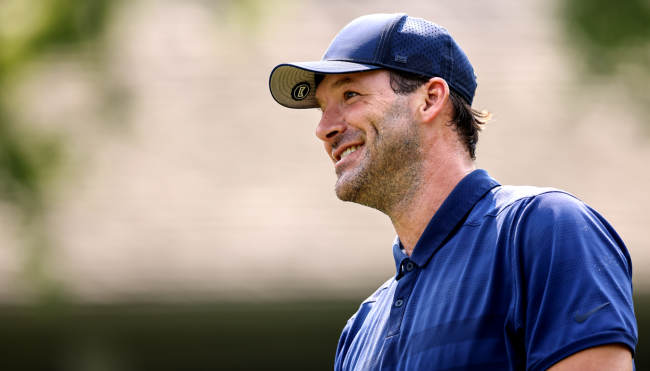 Tony Romo, as any good NFL fan well knows, is pretty darn good at making predictions when it comes to football.

The former Cowboys quarterback has shared many prophecies since becoming the top color man for CBS following his NFL career.

So, this week during an appearance on The Zach Gelb Show, the 2022 American Century Golf Championship winner was asked who he thinks will be the Pittsburgh Steelers’ starting quarterback come Week 1 of the NFL season.

“I think you’ll see [Mitchell] Trubisky start,” Romo predicted. “I mean, like, once you’ve been in the league for a while, you have such an advantage over someone else coming in learning a system.

“I mean, it’s really hard for a youngster to learn. When you have a guy who’s been in the league for three or four years, I mean, he has a very big advantage on just terminology, communication in the huddle, just overall. That’ll be tough, I think, to start by that point. But [it] doesn’t mean that he can’t later on.”

.@tonyromo tells @ZachGelb that he thinks Mitch Trubisky will start the season for the Steelers. pic.twitter.com/LDM63KQ9ub

“The biggest thing is, he’s got to get healthy with his shoulder,” Romo said about his fellow Eastern Illinois alum. “But, when he gets healthy, you’ll see teams coming in. Right now, I think the Niners are staying pat. Because as soon as a quarterback gets injured in camp or in preseason, something usually happens where someone gets banged up, a bit. You’ll see that’ll be when the value will go up, and the 49ers will get more value than they’re getting right now. I think that’s when they’re going to pull the trigger.”

While the Seattle Seahawks are certainly a team that could use a good quarterback and have been rumored to be poking around, Romo doesn’t see Garappolo ending up there, unless the offer is overwhelming.

“There’s no exact spot right now, that I see,” he said. “I can see [a Seattle trade], but it’s usually rare because you’d have to be getting a lot more for that. You know this person knows your team, inside and out, and don’t necessarily want someone else in the division to have that kind of information or talent… If they view him as a really talented guy, but think Trey [Lance]’s a bit more talented, they probably won’t do that and trade him within the division. But if they view him not at that level, it’d be different.”

Listen to the entire discussion below…