Canada Continues To Try To Rehabilitate Their “Nice Guy” Image, Launch A GoFundMe For Kevin Durant 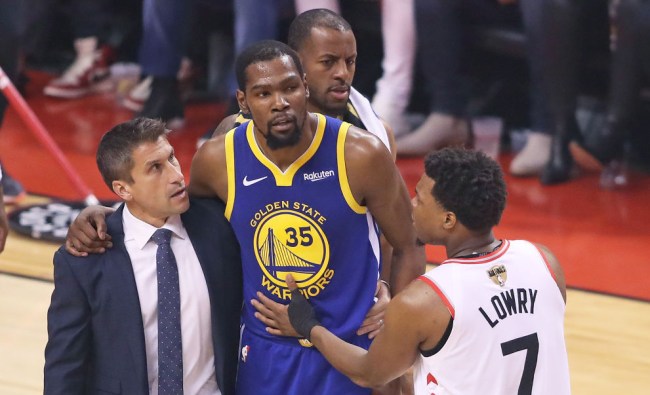 Following their admittedly embarrassing initial reaction to Kevin Durant’s catastrophic Achilles injury, the fine people have Canada have been doing everything they can to rehabilitate their image as our friendly neighbors from the north, including launching a GoFundMe to donate to Kevin Durant’s charity.

“On behalf of the level-headed and true fans of Raptor Nation – from Toronto to Vancouver to Iqaluit to St. John’s, and any fans living outside Canada: we wanted to say “sorry”,” the description — written by proud Ontario man Hamzah Moin — begins.

“We’re sorry that some fans of Raptor Nation at the Scotiabank arena, Jurassic Park, and in some bars/restaurants showing the game, displayed an ugly side of fandom when they cheered on the injury of Kevin Durant. This isn’t cool. This isn’t right. This isn’t what I expect from fellow Canadians,” Moin continues.

“Join me in sending our well-wishes to KD as he recovers. He’s put his blood, sweat, and tears in this beautiful sport. Let’s give back to something he’s passionate about – helping to enrich the lives of at-risk youth from low-income backgrounds through educational, athletic and social programs through the Kevin Durant Charity Foundation,” the description concludes.

The money raised by the GoFundMe will go directly to the Kevin Durant Charity Foundation, whose mission is “to enrich the lives of at-risk youth from low-income backgrounds through educational, athletic and social programs”, according to the foundation’s official website.

Durant, who tore his Achilles during Game 5 of the NBA Finals in Toronto, is reportedly set to miss the entire 2019-2020 season as he rehabs the injury.

While Durant has largely been one of the NBA’s biggest villains in recent years, the basketball world has been in unison when it comes to the disappointment surrounding his Achilles injury, as no one who appreciates the sport wants to see arguably its best player go down in such a heartbreaking fashion.