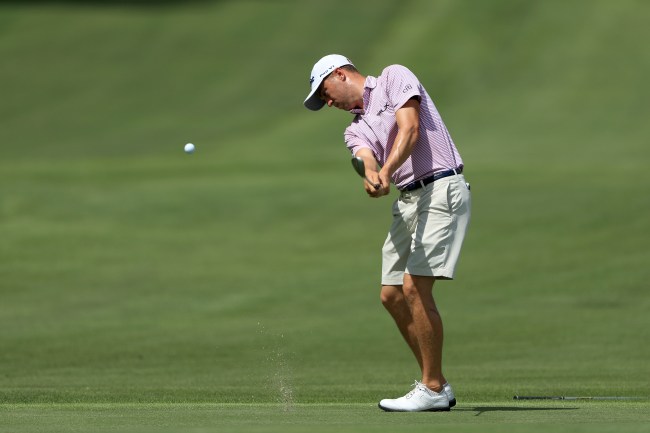 John Rahm staved off Dustin Johnson with an epic putt on 18 last week at the BMW Championship, in one of the most exciting endings we’ve seen on tour in a while.

We had some shots at taking this tournament down, but ultimately, our guys faded down the stretch, mostly Hideki Matsuyama and Rory McIlroy who were right at the top of the leaderboard, but faded as Sunday went along.

We arrive to the Tour Championship, the very last event of the 2020 season. It’s been a hell of a ride this year, and I’m looking forward to kicking off the 2021 season next week and brining more to come. Some of the stats from the 2020 season include:

We head to East Lake Country club for the Tour Championship this week. This event is quite unique, as there are only 30 golfers left in the playoffs, and the way it starts is quite different. Based on your FedEx Cup standings position, you start with strokes off your score. Dustin Johnson, who is in first place in the standings will begin the week at -10 and already in first place. John Rahm, in second place, begins at -8, and Justin Thomas, in third place, begins at -7. This continues all the way down until we hit the bottom five guys, who start the week even par (Smith, Hovland, Hughes, Champ, Horschel). So the odds for the top guys are way worse than usual, and not as many players have a legit shot at winning this week.

With all that information, we need to shrink our card in order to make some money, because someone like Dustin Johnson is just +200. Not a lot of value in betting DJ this week, so we need to go down the board a bit, and hope someone has a big week.

Let’s have a look at who we are going to be rooting for to bring home some cash for us this week.

Below is a refresher on how I am allocating my bets this week, and who I like to take down the Tour championship. 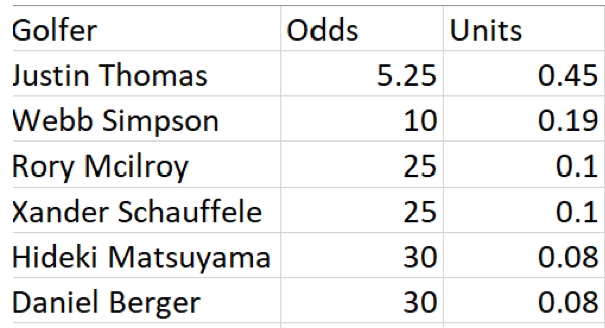 A smaller field without a cut, means we can feel more confident in lower priced guys, as they are guaranteed to score points for us all four rounds.

Another week, and another model that spits out Justin Thomas as the best golfer in the field. Good form, good long-term stats, and a good history here, make Thomas the guy I am going to target the most from the high-priced studs. He only has to make up three strokes to get to first place, so he’s certainly in play to win this tournament. When you compare prices to Rahm and DJ, it’s tough to get them in their lineup in comparison to JT.

McIlroy won this tournament last year, making up a 5-stroke deficit at the beginning of the week to win. This year, he needs to make up 7, but let’s face it, he’s Rory McIlroy. When he’s on, no other golfer in the field can match him. With his discounted price, he doesn’t have to win, but he needs to get up there. There’s no doubt in my mind he can pull that off.

Schauffele begins the week at -3, so we shouldn’t have very big expectations for him to take this tournament down. However, he’s won here in the past, and generally plays well in big tournaments. He ranks highly in my model, so he can certainly get himself into contention, and even though he will probably fall short of winning, he can certainly pay off his salary.

A fixture in this article recently, Hatton rides good form, good long-term stats, and a cheap salary to be included this week. Another guy with upside to get hot and backdoor a top 5 even though he starts at -2, Hatton allows you to pay up elsewhere.

If we are looking for a golfer to make a big jump from their starting position for cheap, Billy Horschel is going to be that guy for me. Horschel has been in great form recently, and he has a history of success at East Lake Golf Club. Coming in my model at 11th at essentially the bare minimum price, he makes paying for guys at the top a bit easier.

My other cheap play this week will be Viktor Hovland, who’s been one of the best golfers on tour this year. He’s consistently made cuts, and has the ability to get very low. While he may not be able to get all the way to the top this week from his starting position, getting into the top ten and maybe even top five is certainly in his range of outcomes.