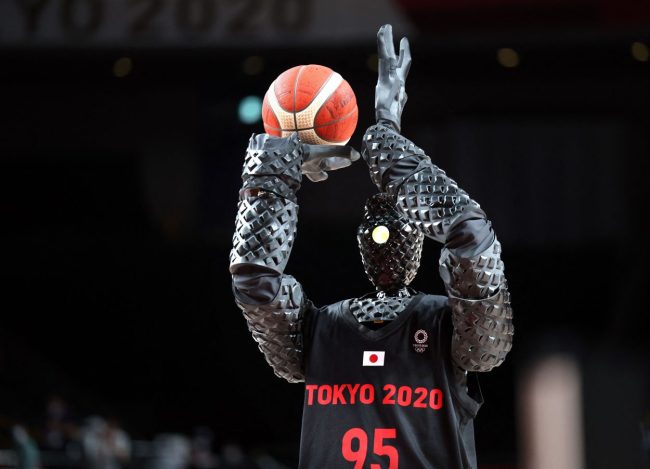 It is time to officially put the human species on the hot seat. Robots are eventually going to come for us and there is simply no point in denying it.

Every day, advances in technology are making significant strides and it’s awesome. However, it also comes with the daunting reality that one day the technology may turn on us.

Have you ever seen Black Mirror?

With that all being said, technology is still super awesome. Toyota’s basketball-playing robot is a perfect example.

A few years ago, Toyota debuted a 6-foot-3 basketball-shooting robot named CUE. It uses artificial intelligence to learn how to shoot and the android marksman is lights out from short distances.

Earlier this summer, during the Tokyo Olympics, CUE took free throws during halftime of some of the games and was automatic. It made for a really easy Ben Simmons joke in the process.

While it is undeniably cool that a stagnant robot can hoop, it gets even more impressive. CUE showed off its skills during a basketball game in Tokyo over the weekend and it is now able to dribble a ball down the court.

It wasn’t a Steph Curry pregame warmup-like performance, but for a robot to be able to dribble while moving is truly wild. Take a look:

🚨 If you're scared of high-tech robots, we have more bad news for you

THIS GUY CAN DRIBBLE NOW, well, at least to some extent 😅 🦾 🦿

Again, this is objectively awesome. But there is undeniably a hint of fear that comes with the idea of a robot being able to dribble and shoot.

If technology continues to advance, what is next?! Especially considering the fact that there are autonomous, cognizant talking robots out there, this new-found athleticism may not be great news for the future.