Travis Pastrana Breaking His Own Record For Fastest Time Up A Sketchy Road On Mt. Washington Is Insane 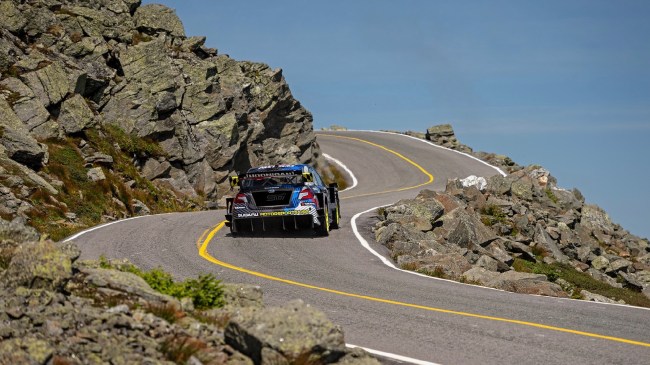 Travis Pastrana continues to one-up himself at every chance he gets. Back in 2017, the motorsports competitor and stunt performer set a blazing fast record up the Mt. Washington Auto Road with a time of five minutes and 44 seconds.

The 7.6-mile road in New Hampshire is the fastest direct route to the top of Mount Washington, a 6,288-foot summit. Pastrana’s ridiculously fastest time broke the previous record by 24 seconds.

Earlier this month, four years after setting the top mark, Pastrana decided to race himself. The 37-year-old hopped in his custom, carbon fiber-bodied, turbocharged Subaru WRX STI and set up the mountain.

He went full-send on the narrow, winding road and absolutely dominated his own time. Pastrana reached the top in five minutes and 28 seconds, which shattered his own record by more than 16 seconds.

The Mt. Washington Hill Climb is traditionally held every three years (four this time because of COVID), and is regarded as one of, if not the most challenging motorsport events in the United States.

Insane speeds on an insane road.

The Auto Road has an average grade of 12% with multiple lengths of 18% sustained and the last 50 yards at 22%.

It elevates 4,650 feet in under 10 miles and ends atop the highest mountain in the northeastern United States— without a guard rail. The on-board camera shows just how sketchy it is to drive up the mountain at such high speeds.