The AAF Flagged Trent Richardson For Spiking Its Really Expensive, Tracking-Deviced Football After His TD 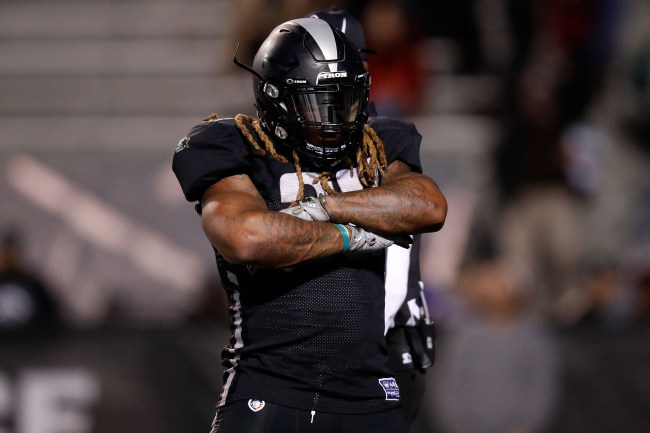 Trent Richardson was once a stud running back at the University of Alabama, then went on and became the No. 3 overall pick by the Cleveland Browns — and then things sort of fizzled out for the guy from there. After trying to make a comeback in the NFL a couple of times over the past few seasons, Richardson had to settle for the newly formed Alliance of American Football (AAF), which kicked off its season this past weekend.

A member of the Birmingham Iron, Trent Richardson helped guide the team to a win in their first ever game, rushing for two touchdowns in the 26-0 victory. While that’s good for Richardson and all, he probably wasn’t expecting a 15-yard penalty for spiking the ball following one of his scores. But that’s what happened after the ball landed in the stands — something that the AAF is against since the league’s footballs actually have tracking devices in them to help measure speed and trajectory of balls that are thrown and kicked.

While Richardson didn’t purposely mean to have the football go into the stands, it did, thus a penalty was called. Sucks, right?

#TheAAF really just threw a flag for unsportsmanlike conduct on Trent Richardson on his first TD for spiking the ball into the stands…what a JOKE.

According to FootballZebras.com, per FTW.USAToday, Trent Richardson was the culprit of a strange rule. Here’s the weird explanation of the AAF’s rule.

Throwing the football in the stands is a 15 yard [unsportsmanlike conduct] foul. … The balls will be equipped with tracking device chips —that means no souvenirs.

While this is technically not an example of “throwing the football in the stands” intentionally, the overriding clause of the rule is “no souvenirs”, which disallows any act that causes the football ends up in the stands, obviously excepting actual gameplay. This was a late add to the playing rules, and it is due to the balls being embedded with RFID tracking chips, allowing fans to “discover the speed, spin rate and trajectory” of the football.

In this case, it seems the rule is in place for budgetary reasons.

So, yeah, the bitch of the whole thing is that Trent Richardson didn’t even technically break the rule, but the flag was thrown since the ball ended up in the stands. That’s according to FOX NFL’s rules expert Mike Pereira, who tweeted that the refs on the field actually made the wrong call since the running back didn’t throw the ball to the fans, but, instead, spiked it and it ended up there.

He will not get a fine and won’t be penalized if he does it again. It is only a foul if a player deliberately throws it and hands it into stands. If a spiked ball bounces into the stands, no foul. It should not have been called.

Plenty of people were talking about the debut of the AAF, so here’s to hoping stupid stuff like this gets worked out by officials to avoid any BS like we’ve seen in the NFL. And here’s to hoping Trent Richardson learns from this weird rule so he doesn’t cost his team another 15 yards next game.