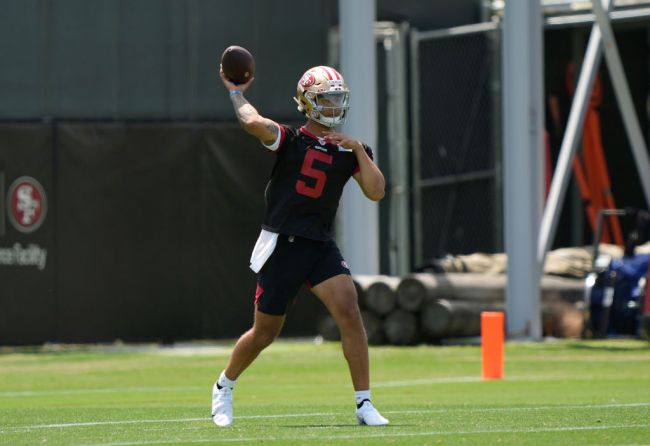 One of the biggest storylines in the NFL this season comes out of San Francisco. The 49ers are two years removed from their Super Bowl loss to the Kansas City Chiefs and are looking to get back as soon as possible.

As the organization tries to figure out its immediate future, the quarterback position is one in particular for which it must figure out.

Jimmy Garoppolo was the guy in 2019/20 but he was injured last season and played only six games. C.J. Beathard and Nick Mullens took over in their place and did not reach the playoffs. Neither backup will be on the roster in 2021.

In their places, the 49ers drafted rookie quarterback Trey Lance out of North Dakota State with the No. 3 overall pick and signed Josh Rosen and Nate Sudfeld to round out the depth chart. Garoppolo is still expected to be the starter, even in the age where rookies are thrown under center in year one.

However, Lance is making quite the case for himself. He is undeniably talented and has progressed in his understanding of the offense.

Despite his impressive start as a gunslinger, Lance is young and has struggled holding onto the football during handoffs. He continues to fumble the exchange and head coach Kyle Shanahan told reporters that it was on both his quarterback and the running backs.

“It’s both of them. That’s why we’ve got to keep repping it,” Shanahan said of the QB-RB exchange. “I mean, that’s the hard thing about it. That’s why, I mean, when you just dabble in that stuff, you’re going to get turnovers. And our D-Line has seen it a bunch, so they’re trying to play it right and there’s just some give and take between both of them. But yeah, if you’re going to fumble the ball we can’t do it. So we’ve just got to keep repping that. It’s going to take some time.”

Getting Lance to jell with his backfield might take some time, but it is an extremely important relationship to establish whether he ends up starting or not. It’s also the type of seemingly small problem that overshadows all of Lances’ early brilliance and will keep him from earning the starting job.

With that being said, he is likely to work into the mix in some capacity. Shanahan spoke about the idea of running an unprecedented two-quarterback system.

The old adage “if you have two quarterbacks you don’t have one” might not apply in the Bay area. Shanahan believes that while it will be “tough” for Lance to win the job outright, he does see them both getting time.

“I think I can ride it out week-in and week-out, personally,” he told The MMQB’s Albert Breer. “I think our guys trust us to make the right decision. It’s cool being in a building where no one has an agenda, whether it’s me, the GM, the owner. Everyone’s on the same page, there’s no pressure—Hey, you have to do this or You have to do that. And our players know that too, that’s what’s great about our place here. When players know you’re on the same page with the personnel department, with the owner, then they don’t really care. They just want to win.

“And I think when this is all said and done, there’s gonna be two guys they believe will help us win and I think they’ll trust us to make that decision, whether it’s permanently, for one game, for a series or just a situation. We gotta balance that out right, though. It’s tough to do, but it is as easy as ‘How do you win the game?’”

Rotating quarterbacks based on opponent and/or situation is something that rarely occurs in the NFL and is almost unthinkable for a team that is trying to get back to the playoffs and Super Bowl in the immediate future. Shanahan doesn’t care and if anyone can pull it off, it would be him.