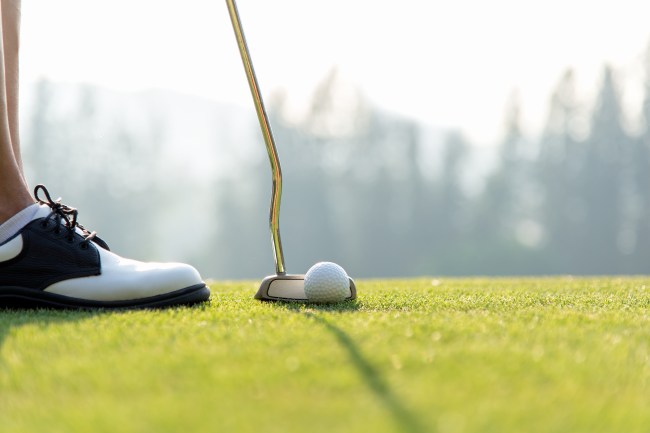 Who in the hell doesn’t love a good trick shot, right? From wild things on the basketball court, to Happy Gilmore-like swings on the golf course, it’s hard not to be impressed by someone who does the unthinkable. And, while I’ve seen plenty of good ones before, this golf trick shot that’s making its rounds on Twitter today might be the most insane my eyes have witnessed.

There are certain things that make a good trick shot. First, it needs to be something nobody has seen online before. I mean, who the hell wants to see something that’s duplicatable? Second, it needs to be real. The Internet doesn’t have time to debate whether or not something has been doctored or not. Third, it has to be something that people watch at least three times to get the full impact of the difficulty. And, on the Mount Rushmore of trick shots, the one you’re about to see accomplishes all those rules, so take a look and be prepared to be blown away.

Uh, what in the hell just happened? Somehow, this guy used a wedge from inside a second floor bedroom to get the perfect speed for the ball to bounce down the steps, roll down a hallway, avoid the obstacles along the way and then, boom, ricochet off a few things and into the cup. It’s literally a once-in-a-lifetime shot.

Considering the difficulty of the trick shot, it’s unsurprising to see how many people couldn’t believe their eyes on Twitter, with people giving their opinions upon watching it. Yes, it included lots of haters wondering how legit it really was, so take a look below at the comments.

Someone at ESPN is related to the source. Might as well have used PVC pipe straight to the cup 😂

Send that one to Dude Perfect

Do you not know how hard it is to keep a ball like that in a moving motion down carpet stairs? Not to mention the railing that was there as well. Plus once the ball got outside, the ball could’ve went into the bushes or the mulch once it got to the steps.

i knew i saw that too

Not all trick shots are created equal, and, whoever the hell was able to pull this one off, kudos to you, because you’ve officially become the master that everyone else strives to be. It’s time to step up your game, Internet people, so let’s see if there’s something that can outdo this one — which is going to be nearly impossible.