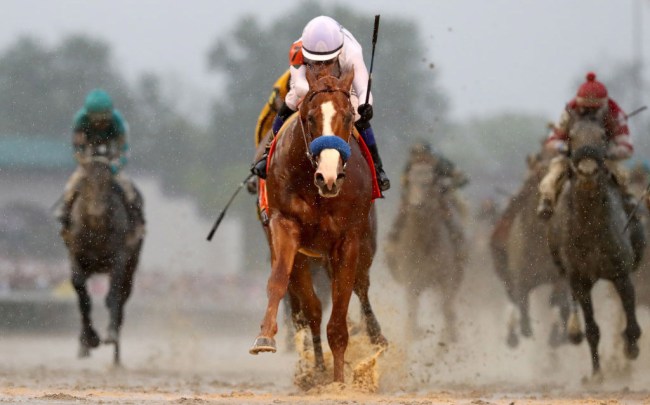 In less than four months (111 days to be exact), race horse Justify went from running in his first race to winning the 2018 Triple Crown at the Belmont Stakes and having his breeding rights sold for $75 MILLION.

Following in the footsteps of 2015 Triple Crown winner American Pharoah, the first racehorse to win the Triple Crown since Affirmed won it back in 1978, Justify will be raking in an astronomical amount of cash for having sex.

As you may or may not recall, American Pharoah, the first horse in history to complete the “Grand Slam” of American horse racing after also winning the Breeders’ Cup Classic, reportedly gets paid $200,000 for every successful impregnation he performs for Coolmore Stud. Pharoah breeds up to three times a day and is capable of making up to $40 million a year.

Justify’s breeding rights were also purchased by Coolmore for a reported $75 million (it was going to be $60 until he won the Triple Crown, raising the price).

The undefeated horse’s value tops the $70 million that Coolmore paid in 2000 for Fusaichi Pegasus, who won five of his seven starts. That figure, through an inflation-adjusted price, would be $104 million.

What makes Justify’s accomplishment more remarkable is that the horse became so valuable just 111 days after his first race on Feb. 18. Justify, who became the 13th Triple Crown winner, was purchased as a yearling for $500,000.

Pretty good return on investment there.

According to Justify’s owners he will probably continue to race in the near future, but once he settles down to a life of green fields and having sex at least 250 times in his first year, Justify will bring in an average of $150,000 per live foal. Which, in turn, would mean that half of the cost of his breeding rights would be covered in the first year alone.