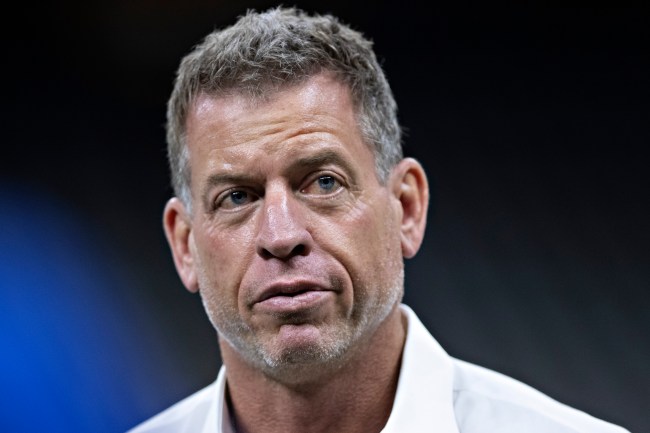 Troy Aikman might best be known for leading the Dallas Cowboys to three Super Bowl titles during the ’90s, but, after retirement, he’s been one of the voices of Fox Sports’ NFL coverage, teaming up with Joe Buck to form one of the more dynamic duos each Sunday afternoon. And, while Aikman is sometimes hit or miss in his opinions on air, occasionally being too dry or nonconfrontational when talking about certain topics, he was anything but when it came to replying to a hot take about Andrew Luck’s shocking retirement.

As we all know, the now former Indianapolis Colts quarterback decided to end his NFL career at 29 years old, with word leaking out during the Colts’ preseason game, which generated lots of attention and reactions on social media.

One of the hottest takes in response to Luck leaving the NFL came from Fox Sports’ Doug Gottlieb, who, in fairness, is paid to stir up controversy every single time he opens his mouth or gives his thoughts on social media. Oh, but his Andrew Luck take was so out there that people couldn’t help but roast him — including his own wife. Included in that group was Troy Aikman, who tweeted this to his Fox Sports colleague.

That’s total bullshit Doug. What qualifies you to decide how someone should live their life? So you’re now the authority on what motivates Andrew Luck? And if his decisions don’t fit into what you think is best for him then you rip him? Guess that keeps you employed on FS1. Nice https://t.co/p59DsmPoER

It was a serious take from Troy Aikman, who typically doesn’t seem to get himself involved in Twitter battles or, even more so, want to rub someone the wrong way. But he felt like Gottlieb’s opinion on Andrew Luck warranted such a reaction, recently telling Jimmy Traina on the Sports Illustrated Media Podcast why he felt so compelled to defend Luck and sort of punk out a fellow employee.

“… I’m not real active on Twitter, I was out of town in my hotel room, and I was bored. I thought I’ll get on here and see what’s happening on Twitter. I had some replies, and usually I only get those when people are screaming about my broadcasting, but I hadn’t called a game in a while, so I’m like I don’t know what’s going on!

“What happened was Doug had sent out his tweet and some people had copied me on it when they were replying, they were saying all the pain I’d dealt with in my career and I’d hung in there. So I’m thinking, well, what was said? I went and saw what Doug had said, and it just really struck a nerve with me, for several reasons.

“I know Andrew Luck, I’ve covered him, the guy loves the game of football, he’s a terrific guy. I know a year ago when I talked to him before one of our games, when he’d missed the season the year before because of injury, and he said he just found himself in a really bad place, and he didn’t like himself, he didn’t like who he was becoming during that year he was away from football and trying to rehab his shoulder. Knowing that, seeing his retirement press conference which I thought he did a terrific job on, especially because he wasn’t even supposed to give that press conference until the next day, I thought he handled it beautifully. I was disappointed that Andrew retired, but only because it’s someone as talented as he is, I’m disappointed I don’t get to watch him play anymore. Beyond that, if he doesn’t want to play football, don’t play! Go live your life the way you want to live it.

“I felt that Doug’s comments were out of line. I didn’t intend for it to be personal with Doug, I know Doug, I’ve been on his show several times. I like the guy, I just don’t think the opinion on what Andrew was dealing with was really reflected the way it should have been.”

Hey, all fair points from Troy Aikman there. Whether it was because he and Luck were in the unspoken fraternity of both being accomplished NFL quarterbacks or otherwise, the Hall of Fame signal-caller felt it was necessary to speak his mind. Of course, in doing so, he had to face the reality of talking to his bosses afterwards; which Aikman talked about with Traina as well.

“I received a couple phone calls, yes, from some of my bosses.

“Well I’m still working! (laughs) When you say that much trouble I don’t know exactly what that means. I don’t know about untouchable. I will say that over the years I just try to be honest, and I don’t go looking to jump into the fray by any means. But if I have an opinion on something and I feel strongly on something then I’ll say it, and whatever the consequences are they are. I have great bosses.

“And I will tell you they were great in how they handled it, not because they handled it the way I wanted them to handle it, I think they were very direct with me and honest, and I’ve always respected those kinds of people. They respected the fact that I was honest, they did not like that I would say something about the company. i understand that, and I appreciate the way they discussed it with me.

It’s pretty awesome getting into Troy Aikman’s mind a bit, and interesting to hear the passion with which he felt it necessary to stand up for Andrew Luck. After all, Aikman has said he suffered 6-8 concussions during his own paying days, so, in addition to knowing firsthand about the pain of playing in the NFL, he has a platform and is paid to voice his thoughts, too, which makes his tweet to Doug Gottlieb more than fair game. Luckily, that wasn’t punished by his Fox Sports bosses.