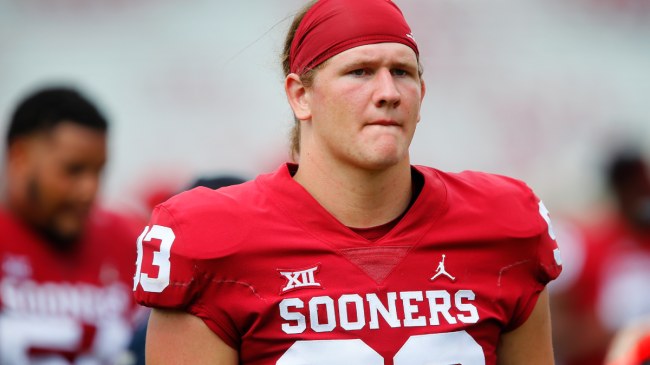 Twitter trolls are the worst. The anonymity allows for users to hide behind a name and a picture, never truly taking accountability for the trash they spew online.

In the sports world, it’s especially frustrating to see these accounts go after particular players and coaches for their performances on the field. And these trolls have no mercy, no matter the target.

That includes 18 to 22-year-old kids at the college level.

On Tuesday, one of these trolls came after Oklahoma defender Reed Lindsey. It didn’t take long for Sooner Nation to strike back.

Lindsey is a junior on the OU roster, joining the team in 2019. After redshirting his freshman season, Lindsey has seen action for the Sooners each of the past two years.

Unfortunately for Lindsey and Oklahoma, things have not gone well in Brent Venables’ first season in Norman. OU is just 5-5 after entering the year as a Big 12 Conference title favorite. They’ve seen blowout defeats at the hands of TCU and archrival Texas. They find themselves on a current two-game losing streak as the team battles for bowl eligibility.

Those on-the-field struggles have led to frustrations amongst fans. But often in these times of adversity, those fans forget that the players on the team are still human, and while they’re putting in work on the field, they do have lives away from it, too.

Reed Lindsey, in particular, is a lover of the arts. A man of many talents. He’s a journalism major who also happens to a musician, though to what extent we do not know.

On Tuesday, the defensive tackle posted a video of some quick strumming of the guitar on Twitter, and of course, it brought about the scum of social media.

Now, before we say that this was an Oklahoma supporter, we’ll say it’s possible that this was some rival fan in disguise taking an unwarranted shot at Lindsey. In fact, that could be more likely.

This troll commented below the defender’s post with a quick jab at the OU program.

Maybe if you spent more time practicing football and studying film and less time writing shitty music we wouldn’t be 5-5.

The absolute worse. As if a player isn’t allowed to have a passion or hobby outside of football. It didn’t take long for Boomer Sooner to come to Lindsey’s defense.

One person wrote, “Maybe if you had other things going on in life you wouldn’t depend on our team for your rush of dopamine!” Another commented, “Please post your resume. I’d like to see why you think your worth anything.”

This person’s remark summed up the asinine statement best, saying, “Seriously? Your pure trash for posting this to a player. TRASH.”

That’s something every college sports fan can agree on.