Ty Montgomery Fires Back At Anonymous Accusations By Teammate, Harassment By Fans: ‘I’m Thoroughly Pissed Off’ 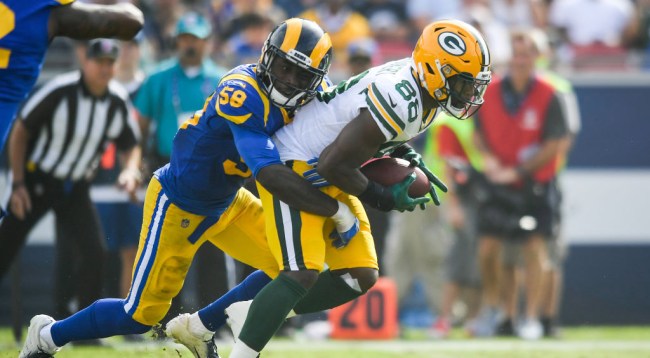 Green Bay Packers fans were very upset when return man Ty Montgomery ruined any chance the team had of mounting a comeback versus the Rams on Sunday when he took a kickoff out of the end zone and proceeded to fumble the ball away. That was to be expected. Though the way some fans went about it was very uncool.

What wasn’t expected was for one of Montgomery’s teammates to go to the media and rip his teammate, claiming Montgomery basically didn’t take a knee to spite the coaching staff and he “threw a fit” on the sidelines.

Montgomery did not speak to the media after the game so his side of the story had been heard.

On Monday, however, the 25-year-old had plenty to say about the issue in the locker room at Lambeau Field, reports PackersNews.com.

“We talk about being brothers,” Montogomery told the media. “We talk about being family and keeping things in-house, in-house, this, that and the other. That’s not what happened. I don’t know. Maybe that’s what they do in their family. That’s not what I do in mine. No one ever said anything to me. No one ever came to me. So I’m thoroughly disappointed in the speculation and just the backlash I have to deal with now. Because now, we’re talking about my character. We’re not even talking about the fumble anymore, we’re talking about my character. We’re talking about the reasons why I did what I did, and I’m not okay with that.”

As for why he inexplicably took the ball out of the end zone rather than take a knee and let #12 go to work, Montgomery said, ““At that point in time, I stood where I always stood, I had a returnable ball. So I made a split-second decision, I don’t know if this is going to land on the goal line. So I’m not going to take a knee on the goal line, at the half-yard line and take a chance at putting the game in the ref’s hands. Unfortunately, I ended up fumbling the football. I don’t think we’d be having this conversation if I didn’t fumble the football because we know how good our two-minute offense is.

He did admit that he was frustrated earlier in the game, saying he didn’t fully understand what his role is right now, but it had nothing to with his decision on the misguided kickoff return.

Now, after a teammate went rogue, he says he doesn’t know who to trust.

“If they want to say it, put their name by it, said Williams.

Jones agreed, saying, “We should be able to come talk to each other. That’s why that is frustrating. Of course you want to know who is saying what.”

As for the fans who took things too far on social media, Montgomery said, “People are making comments on posts about my son. I’m getting phone calls, people offering their houses to stay (at) because apparently people are making threats online. I’m thoroughly pissed off at the state of humanity right now. That’s all I can really say about that.”

Montgomery was frustrated with the anonymous quotes from at least one teammate that portrayed him as selfish: pic.twitter.com/aIJQl2t8pZ

And this is just ridiculous. Montgomery says he and his family are being harassed and threatened because of his fumble: pic.twitter.com/xxC0rhcWWz