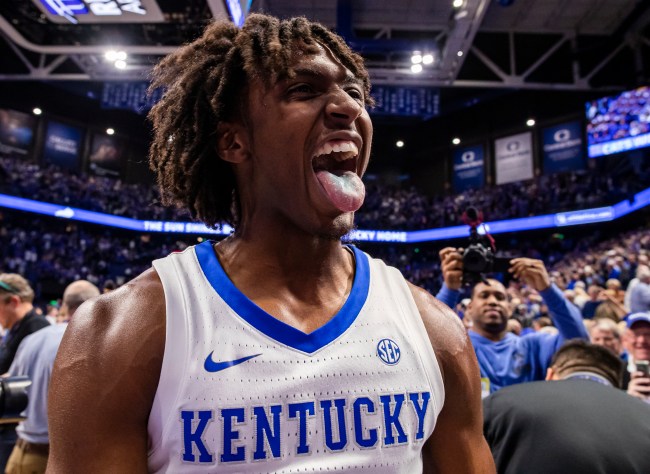 Tyrese Maxey, who tied for second on the Kentucky Wildcats in scoring last season by averaging 14.0 points per game, just got some motivation as he’s set to enter the NBA in a couple months. That’s because, per The Athletic‘s Sam Vecenie, an anonymous college basketball head coach whose team faced Maxey during his lone college season had quite the harsh critique of the likely NBA Draft lottery pick, saying the shooting guard is one of the most “overrated guys in the draft,” among other things.

“One of the more overrated guys in the draft. Personally, I don’t think he can shoot. I’d also question his basketball IQ. I think he’s more of a one dimensional player. It’s probably just a product of being brought up through AAU. He’s always been a prolific scorer with the ball in his hands, I just think the NBA is way more than that. And I don’t think think it’s a consistent jump shot. He’s a great athlete. Right-hand dominant more than anything in my opinion. But I didn’t fear him. He wasn’t the guy I feared.”

Sheesh, the anonymous college hoops coach sure didn’t mince words, did he? While Tyrese Maxey might not be the most dominant player available in the NBA Draft, one would imagine that the streaky scorer does show solid upside given his only season at Kentucky — especially since, just a year ago, he was a 5-star recruit.

Although the anonymous coach isn’t so high on Maxey as he’s set to enter the NBA, the guard’s own college coach, John Calipari, expectedly touted his former player’s skills, adding that the 19-year-old still hasn’t even realized the potential he has yet. Here’s what Cal tweeted in response to Maxey declaring for the NBA Draft back in April.

I was harder on @TyreseMaxey than any player this season, and there’s a reason. One, he’s a great kid with a confidence in his ability that does not waver. Two, he has a potential that he has only begun to realize. And three, Tyrese needed to be challenged to take that next step. https://t.co/4sM2JMGL0N

Many mock drafts have Tyrese Maxey as a lottery pick in this year’s NBA Draft, with a few even seeing the combo guard going as high as the top-10. And, just like other players who were criticized leading up to the draft — which includes the likes of Steph Curry in 2009 — Maxey will have a chance to use the harsh evaluations by some as fuel to prove he’s better than they might assume.