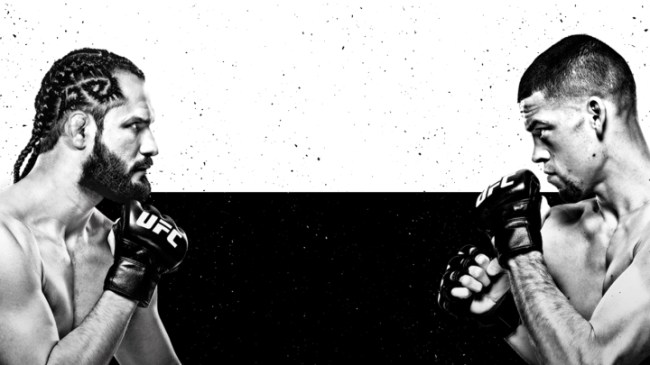 For its 500th event, the UFC is promoting one of the biggest and most novel fight cards in the history of the industry leader in mixed martial arts. With the BMF title fight between Nate Diaz and Jorge Masvidal set to headline the UFC 244 PPV on ESPN+, the remainder of the card features a number of incredible fights, bouts between ranked contenders, crafty veterans, and known finishers.

There are also a number of highly touted prospects fighting on the UFC 244 card on ESPN+, so let’s dive in a bit and take a look at the next generation of BMFers, all of whom will take it to the Octagon on November 2 at Madison Square Garden.

Fourteenth ranked welterweight Vicente Luque is his own type of BMFer.

A quiet killer, who has finished nine of his 10 wins inside the Octagon, Luque has patiently made his way up the divisional ranks since joining the UFC in 2015, delivering blistering bonus-winning performances and a pair of Fights of the Night.

Still just 27 years old, Luque is already a UFC veteran, and his upcoming fight against Stephen “Wonderboy” Thompson on the UFC 244 PPV main card on ESPN+ is by far the biggest bout of his MMA career.

This will be Luque’s second fight at Madison Square Garden, the most famous arena in sports. Last time around, he dished out a nasty knockout, completely flooring opponent Belal Muhammad, but the “Wonderboy,” who is currently ranked eighth, is a huge step up in competition.

This is a big moment for Vicente Luque, who has had difficulty booking big time fights, mostly because guys don’t want to fight someone so dangerous. A win over Thompson will instantly propel him into the welterweight top 10, which is when the talks of title contention start.

It’s a bit misleading to call Gregor “The Gift” Gillespie a prospect, but only because he’s already 32 years old. However, at 6-0 inside the UFC Octagon (he’s 13-0 overall), Gillespie doesn’t have too many miles on the odometer, mainly because he only became a professional MMA fighter at the age of 27. Before that, he was tearing it up on the wrestling mats, even winning an NCAA D-I championship back in 2007.

Gillespie remains a bit of an MMA oddball and outlier. He’s quiet, respectful, and really into fishing. Actually, “The Gift” prefers to label himself more of a fisherman than a fighter, but with five straight finishes inside the Octagon (3 knockouts and 2 submissions) it’s impossible to ignore his resume.

Already ranked eleventh in the UFC’s super deep lightweight division, Gillespie will have by far the biggest test of his MMA career on the UFC 244 PPV main card on ESPN+. He’s taking on former title challenger Kevin Lee in what will be a very intriguing matchup of grapplers.

For Gillespie, a win at UFC 244 would be huge. At 7-0 in the UFC, he’d crack the lightweight top-10 and could potentially set himself up for a big fight (perhaps even a main event) against someone like Edson Barboza, Paul Felder, Dan Hooker, or even Justin Gaethje.

Is Johnny Walker the Next Title Contender at Light Heavyweight?

If you’ve been paying attention to our coverage of UFC 244 on ESPN+, then there’s no doubt that you’ve already heard of Johnny Walker, the high flying light heavyweight from Brazil who’s known for wild finishes, spinning backfists, flying knees and the like.

Walker has made a huge splash since joining the UFC in late 2018, and this fight against seventh ranked Corey Anderson is a major opportunity to stake his claim as the next challenger for Jon Jones’ light heavyweight title.

This is a big spot for Johnny Walker, and everyone’s eager to see if he can deliver another wild knockout.

Now this is a great fight between a pair of prospects. The winner of this bout could potentially be a player at featherweight for quite some time.

For Finland’s Makwan Amirkhani, UFC 244 represents his first fight outside of Europe, and the first time North American fans will be able to see his masterful wrestling skills in action. On the other hand, Burgos, a native New Yorker, has already performed on a trio of UFC PPV cards, including last November’s UFC 230, which took place at Madison Square Garden.

What we know about Amirkhani is that he not only has a great wrestling base, but he has the submission game to finish fights. He also trains at SBG in Dublin with Conor McGregor’s head coach John Kavanagh.

Conversely, Burgos is a striker, through and through. A disciple of New York’s Tiger Schulmann, Burgos climbed into the featherweight top 15 earlier this year, when he took out veteran Cub Swanson in Ottawa, which was his biggest moment inside the Octagon, aside from cutting off his ponytail in between rounds during his UFC debut back in 2016.

This fight is a great striker versus grappler matchup, and while it won’t steal too many headlines, it’s a bout that piques the interest of hardcore MMA fans.

Can Shahbazyan Follow in the Steps of His Manager, Ronda Rousey?

UFC middleweight Edmen Shahbazyan is only 21 years old, and he’s already ranked thirteenth in the world.

Undefeated at 10-0 as a professional mixed martial artist, Shabazyan is already 3-0 in the UFC and looking for his fourth win inside the Octagon in less than a year. His last two fights lasted a combined 2 minutes.

Those are kind of the broad strokes on Edmen Shahbazyan, but beneath the stats, he’s a young, dynamic and powerful striker, who also has a submission game, as evidenced by his most recent performance. He also has a unique team behind him: former UFC champion Ronda Rousey, one of the most popular MMA fighters of all time, has helped guide his young career, ever since employing Shahbazyan as a training partner when he was just a teenager.

Shahbazyan is totally one of those fighters where you feel like the sky’s the limit. He’s so young, green, and raw, and yet he fights like a mature, experienced, and refined verteran, which will be essential at UFC 244, when he takes on eleventh ranked Brad Tavares, a 17-fight UFC veteran who’s been fighting in the Octagon since he was just 22.

This will be a big test to see if Shahbazyan is ready to continue his run up the rankings.

Between a pair of undefeated prospects, and a handful of ranked fighters on the rise, the UFC 244 card on ESPN+ is not just about the big names and the BMF title. It’s about the best MMA action and creating a new generation of BMFers.