Will UFC 252 Really Be the Last Time We See Daniel Cormier Inside the Octagon? 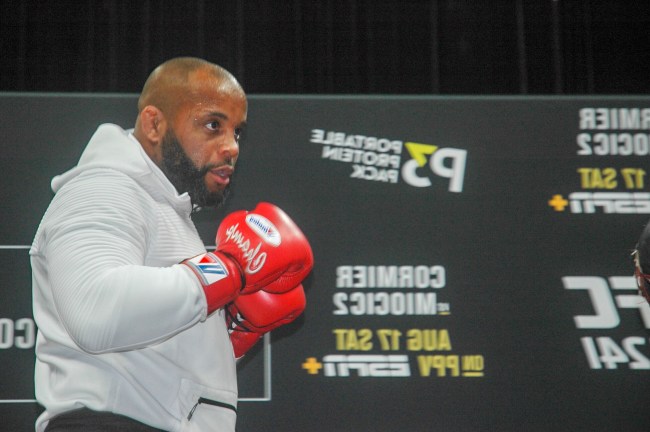 Tonight, at UFC 252, professional sports may very well witness one of the greatest send-offs in history. At least that’s the way former two-division UFC champion Daniel Cormier is envisioning it.

Set to compete in his final fight in the Octagon as part of the UFC 252 PPV main event on ESPN+, Cormier will look to reclaim the heavyweight title he lost last August to Stipe Miocic. He’ll look to avenge a loss and stake his claim as the greatest heavyweight in UFC history, all while preparing to say farewell to the sport of mixed martial arts nearly 11 years removed from his professional debut.

“Peyton Manning won a Super Bowl in his last season,” explained Cormier during the final press conference before his historic trilogy fight against Miocic. “It would put me in that type of sphere with some of the greatest athletes that have ever competed across any sport. So, when I win on Saturday, I will retire in that way.”

Now 41, Cormier got off to a late start in his MMA career, only turning pro after his thirtieth birthday. By then, of course, Cormier was already one of the best wrestlers in the world, having competed on two U.S. Olympic wrestling teams. But in the sport of mixed martial arts, Cormier went from novice to world champ in less than three years.

His rise from rookie to all-time great has produced some fantastic memories, incredible highlights, and historic rivalries. And during the last decade, Cormier has become one of the most revered and respected fighters in the UFC and the entire sport of MMA.

So then, what should we really make of Cormier’s career now that he’s calling it a day?

Aside from his current rivalry and trilogy against Miocic, Daniel “DC” Cormier will always be best known for his pair of mega-selling fights against Jon “Bones” Jones.

Cormier and Jones sold close to a million Pay Per Views on both occasions, at UFC 182 and UFC 214, igniting the MMA fanbase and inciting fans to pick a side in the contentious rivalry. Cormier, in particular, found a way to connect with fans, both MMA hardcores and casual mainstream fans, routinely delivering powerful and funny anecdotes, while sharing the personal details of some of the many tragedies that have occurred in his life. His honesty and candor brought an important human element to this dominant athlete, known for his aggressive style and takedown expertise.

But the Jones and Miocic rivalries are not the only long-lasting memories of Cormier’s remarkable career. For example, do you remember the time that “DC” fought Anderson Silva on two days notice?

From just a boy in Louisiana to an MMA legend 🏆@DC_MMA's story enters a new chapter after tomorrow evening. #UFC252 pic.twitter.com/j4jBEgylrq

Back in 2016, just before UFC 200, where Cormier was set to face Jones for the second time, “Bones” was red-flagged and removed from the event during fight week after testing positive for a banned substance.

After attempting to convince the UFC and the Nevada Athletic Commission to allow him to fight Jones, despite the failed test, Cormier took the next best option: a fight against one the UFC’s greatest fighters, Anderson “The Spider” Silva.

That night, Silva received most of the praise, filling in on 48 hours notice to replace the suspended Jones. However, Cormier also accepted one of the most dangerous opponents in the history of mixed martial arts less than two days from fight night. That’s total legend status right there.

In fact, Cormier’s career is full of memorable moments (his pair of submission victories over Anthony “Rumble” Johnson, both in title fights, come to mind), and tonight he’ll look to add one more, perhaps even the greatest highlight of his storied career.

“You gotta be comfortable walking away as the best in the world, or eventually you’re gonna end up on the prelims for somebody to beat you and build off of your name. It’s just the way the game works,” commented Cormier, who has been adamant that this will be his final fight.

However, with his head coach, American Kickboxing Academy owner Javier Mendez, explaining that Cormier is currently performing like someone ten years younger, it’s plausible for the fanbase to offer a bit of speculation surrounding the retirement, especially in combat sports, where a 54-year-old Mike Tyson just announced his comeback against Roy Jones Jr., who is 51.

There’s also the possibility of a third fight with Jones, at heavyweight, which might prove to be too financially lucrative to pass up. Seriously, that’s a multi-million dollar paycheck sitting there for the taking. But Cormier insists that after tonight, he’s done with MMA competition, and will shift his focus to coaching high school wrestling in Gilroy, CA, while working as a broadcaster for the UFC.

It takes a true, bonafide legend to be so comfortable with their life and career to walk away from a seven-figure purse, and Cormier understands that all good things must come to an end,

“Great champions always have one good night, and then they tempt fate. I’m not willing to do that,” added Cormier. “I’m just gonna get my belt and go into playing golf.”