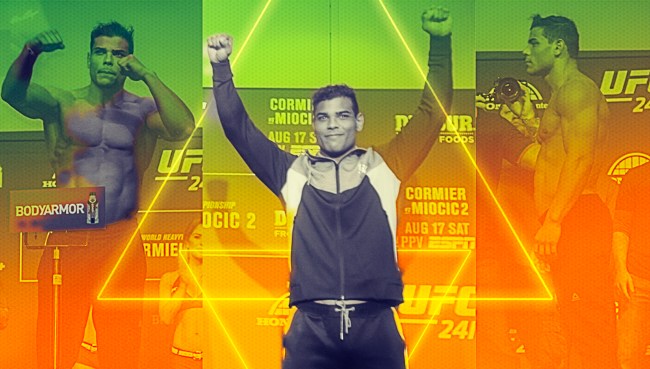 The list goes on from there, honestly. There’s Royce Gracie, the very first UFC champion, Amanda Nunes, the Greatest Female Fighter of All time, and current UFC flyweight champ Deiveson Figueiredo. Brazil, due to its Jiu Jitsu roots and the popularity of MMA nationally, has always been a major hotbed for mixed martial arts. And, this Saturday, September 26, middleweight Paulo “The Eraser” Costa looks to add his name to this distinguished list of Brazilian legends, when he challenges champion Israel “Stylebender” Adesanya in the UFC 253 main event on ESPN+ PPV.

A hulking and muscular middleweight, massive for the division, Costa has been one to watch ever since he joined the UFC in 2017. His toned and honed physique, extraordinary power, and near perfect finish rate have led him to a 13-0 professional MMA record, including 5 wins in the Octagon. He fights, and looks, perfectly, so there’s no doubt that he’s right on the cusp of greatness, the precipice if you will. But first he’ll need to do battle with Adesanya, his longtime rival, who also carries a perfect record into the UFC 253 main event.

Examining Costa’s career, the foundation was set from the beginning for him to take the UFC by storm. First dominating the Brazilian national circuit before joining the UFC, Costa has gone from prospect to hot commodity in less than four years.

Rattling off five straight wins in the UFC, Costa has finished all but one of his bouts, a brutally tremendous unanimous decision over Yoel Romero at UFC 241. It was in that Fight of the Night that “The Eraser” showed his true grit, buckling down in the face of adversity, eating punches while dishing out heavy leather. Sitting cageside that night, I can attest that it was a thing of immense beauty and courage.

For all his success in the UFC, Costa has been plagued by injuries, which have limited his appearances. He’s fought only twice in the last three years (by comparison, Adesanya has fought nine times in the same span, once while he was still on the Australian regional scene), but looking at his record, it’s clear that the slow build has only helped his marketability and star power, especially in Brazil.

Having never competed in a main event or a five-round fight, Costa has already performed on some of the UFC’s biggest stages, absolutely obliterating Johny Hendricks at UFC 217, considered by some accounts the greatest UFC card of all time (for the record, I side with UFC 189 as the greatest card in history). He’s also shown off his skills at UFC 226 in Las Vegas, along with the aforementioned UFC 241, which was a smashing box office success for Pay Per View on ESPN+.

Building up fighters is never an easy task, but somehow, with Costa, the UFC and his team have done everything right, creating a potential superstar. In Brazil, there is tremendous expectation and anticipation that Costa could not only be the next big thing, but perhaps even the biggest thing since Anderson Silva, no disrespect to the other UFC legends on the list of Brazilian champions.

But with expectations comes pressure. However, Costa seems to display none of it. Cool, calm, and collected, he’s enjoying his time on Fight Island, soaking up fight week, trash talking Adesanya like he’s always done. His banter and delivery are actually quite endearing, but make no mistake “The Eraser” is a mean machine, a total beast once the Octagon door closes.

There will be plenty of hurdles in the UFC 253 main event. Costa will have to deal with Adesanya’s length and range game. He’ll also need to be prepared to go into deep waters with “Stylebender,” who has already main evented five UFC cards, going the full 25 minutes on three occasions.

Cardio management will be crucial for Costa, but if the performance against Romero is any indicator, “The Eraser” will empty his tank at UFC 253. There’s just simply no quit in him.

So will Paulo Costa become Brazil’s next big thing? It’s certainly possible. And, with a big win in the UFC 253 PPV main event on ESPN+, there’s a chance he might just become MMA’s next big thing, headlining UFC cards for years to come.

For now, we’ll just need to tune in and watch. No doubt this is a fight that can not be missed.