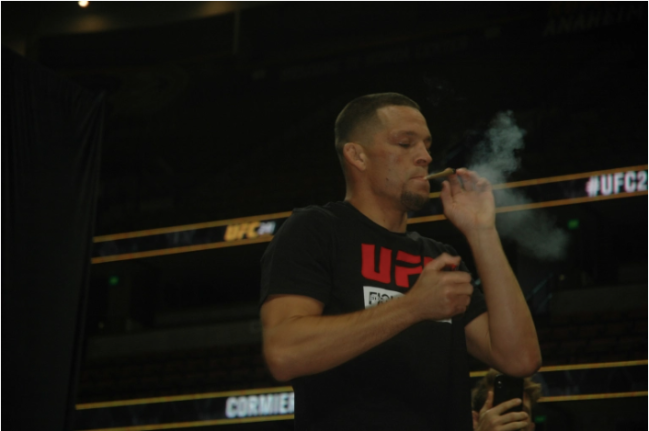 Do you remember where you were when Nate Diaz choked out Conor McGregor at UFC 196? I sure do.

What about that time Nate blazed a pen at the UFC 202 post fight press conference, or when he sparked a joint at the UFC 241 open workouts. Do you remember where you were then?

Again, for me, that’s a no brainer. I was right there, just footsteps away from Diaz, on both occasions, able to catch a hefty waft of his indica-dominant hybrid.

So, when it was announced that this Saturday’s (September 10, 7 p.m. PST / 10 p.m. EST) UFC 279 main event against welterweight killer Khamzat Chimaev would be Nate’s final appearance in the UFC Octagon, I couldn’t resist the opportunity to salute the realest fighter in the game. Or rather, the realest.

Nate Diaz isn’t some ordinary, run-of-the mill fighter. He was never a champion either. But, before he even burst onto the UFC scene as a brash 22-year-old trash talker on The Ultimate Fighter, Diaz was already on his way to becoming MMA royalty.

The younger brother of the legendary Nick, Nate forged his own path in the UFC, one laden with submission victories, fight night bonuses, counterculture irreverence, and middle-finger waving clashes with management. Of course, it was the two fights against McGregor in 2016 and the BMF title fight against Jorge Masvidal at UFC 244 that put Nate on the celebrity map, at-large, but for the last 15 years, Nate Diaz has been everything that is right about the fight game.

Sure, Diaz has lost plenty, but he’s won quite a bit as well, and always in the name of true martial arts and combat sports. He took the bushido spirit and re-mixed it with a bit of hyphy culture, sprinkling a layer of kief on top for good measure.

Nate Diaz, in his own way, has moved the needle in every facet of MMA. He’s fought for the title, taken on the system, challenged USADA, and threatened to walk when his name and reputation were put in disrepute. And, he’s always accepted the toughest fights out there, which is a roundabout way to circle back to this Saturday’s PPV main event against Chimaev, who, for his part, is nothing less than the greatest prospect in the history of mixed martial arts.

Listed as a +700 underdog, Diaz has his work cut out for him against Chimaev, a dominant wrestler with steamrolling abilities and an effortless gangster suave. However, on the other end of this fight is true freedom, something that has eluded Diaz since he signed with the UFC in 2007.

With his contractual freedom intact, Diaz is sure to have lucrative options in professional boxing, with some speculating a fight against YouTuber Jake Paul in the near future. He can also focus on his newly announced combat sports promotion, the aptly named Real Fight Inc., which was unveiled this week.

And, as excited as I am to watch Nate Diaz grow and branch out with these new and exciting endeavors, I’d be lying if I didn’t at least verbalize that, for my own selfish reasons, I wish Nate would stick around the UFC a little while longer, at least long enough for the third fight with Conor, the matchup against Dustin Poirier that never made it to the altar, and the rematches against Masvidal and new welterweight champ Leon Edwards that Diaz has undoubtedly already asked for behind the scenes.

But see, Nate’s too real for that, if anything because, after a lifetime, he’s learned the fight game inside and out, and knows how to maximize his value and truly leverage his worth.

So, while Saturday’s UFC 279: Diaz vs. Chimaev main event may not be a warm and fuzzy farewell for a fighter who has greatly helped the UFC expand its reach and grow its brand, it may be the realest sendoff in recent memory. And, while Diaz didn’t particularly want the Chimaev fight, he is the UFC’s realest after all, the fighter who’s always kept it “💯,” so, if anything, it’s a fitting goodbye for one of the UFC’s most revered athletes.

That is, until his Hall of Fame induction ceremony …