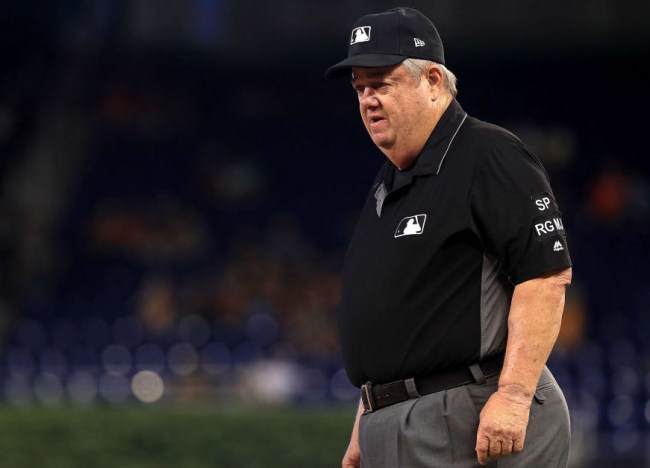 As a general rule, anyone who officiates a sport for a living doesn’t head down that career path because they’re in it for the glory. You’re less of an individual and more of a faceless being in a uniform, and while there are certainly exceptions to this rule, if a sizeable percentage of fans know your name, you’re probably doing something wrong.

Tim Donaghy literally rigged NBA games for the mob but I don’t know if he’s as reviled as Joey Crawford, whose insistence to make himself the center of attention helped him become possibly the most hated official in the history of sports by the time he retired from the league.

However, there are others who give him a run for his money, and while Major League Baseball is full of contenders, there may be no umpire who’s despised more than Joe West, who is both incredibly unlikeable and incredibly bad at his job, as a Boston University study from last year showed he’s averaged 21 incorrect calls a game (2.3 per inning) over the past 11 seasons.

Keep up the good work, Joe.

If you’re not the biggest baseball fan and need a quick catch up, just watch this video appropriately titled, “Joe West sucks.” You’ll see what I mean.

With the MLB currently planning to play a season in the middle of a pandemic, you’d think (or hope) Joe West would sit this one out—especially when you consider the league has offered to give him his full salary to not ump because he sits firmly in the high-risk category .

Sadly, that is not the case.

West recently spoke with The Athletic to explain why a 67-year-old umpire who has not, shall we say, historically been the embodiment of physical excellence would want to subject himself to the risks that come with working when he could get paid to, you know, not, saying:

“I’ve lost 25 pounds over the winter. I’m playing golf every day in the heat. I’m fine. I’m not going to back down now…If this game hasn’t gotten me by now, no virus is going to get me. I’ve weathered a bunch of storms in my life. I’ll weather another one.”

Look, I support anyone who’s trying to be healthy, but unless I missed a press conference, I don’t recall Dr. Anthony Fauci urging older members of the population to go out and play golf because it’s the best way for them to ensure they’ll be “fine.” I’m also not sure if standing your ground while getting yelled at by a manager really prepares you for combating a deadly infectious disease, but hey, if he wants to keep being a lousy umpire, I can’t stop him.

However, West didn’t stop there, as he shared a theory downplaying the fears over the pandemic that he used to justify his decision to MLB officials that’s bad enough to make his umpiring abilities look godly in comparison:

“I said, ‘Look, most of these people that they’re reporting are dying are not healthy to begin with.’ I don’t believe in my heart that all these deaths have been from the coronavirus. I believe it may have contributed to some of the deaths. I said, ‘I’m not going to opt out. I’m going to work. And I’m going to work until you take me off the field or I get hurt, whatever. I’m working.’”

Like it or not, the old man will be back on the field in 2020 doing what he loves to do (supposedly. I’ve never seen this guy smile even for a second).

With all of this talk about Joe West, I feel I might as well plug his sketchy-looking website, which is your one-stop-shop for Joe West umpire equipment and, um, CD’s? It also lists his email as “umpirejoewest@aol.com,” and while I have no idea if he still uses it, he seems like the kind of guy who’d still be paying for AOL in 2020 so maybe shoot him a message to find out.