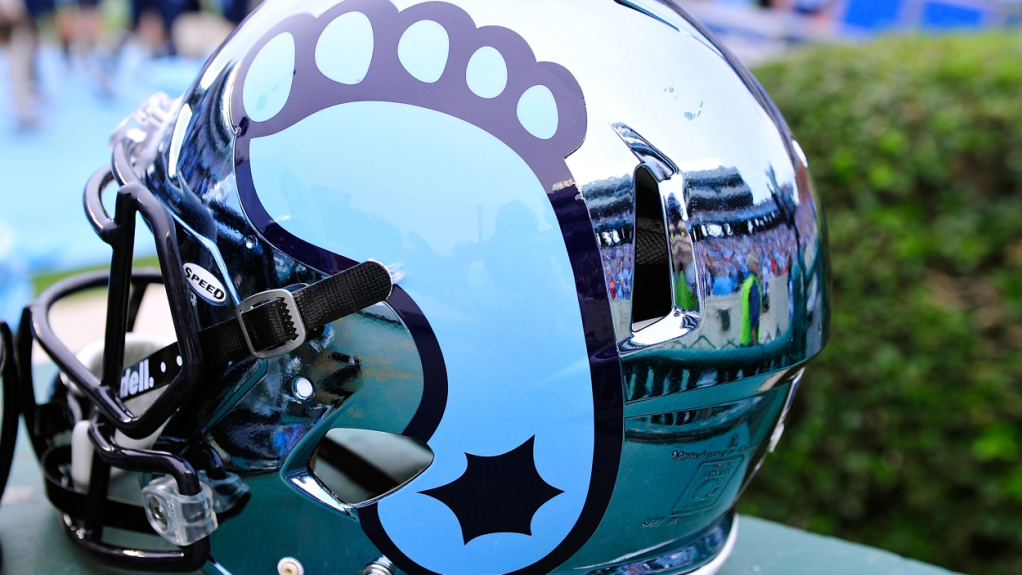 Heading Week 7 of the College Football season, the BYU Cougars and UNC Tar Heels football teams are looking HOT. Or rather, they are looking ice cold.

Both the BYU and UNC football teams are wearing incredible blue helmets right now. I propose that we get the squads together for an arm wrestling competition to decide which blue helmets are better. That, or we can all just fight it out in the Facebook comments if that’s what everyone would prefer.

First, let’s check out these helmets and unis from the BYU Cougars Football Team.

The BYU Cougars will be wearing white again. They are set to host the Arkansas Razorbacks after barely losing to Notre Dame last week.

For me, it’s the actual cougar on the helmet. Their ‘too much sauce’ caption doesn’t accurately describe how sick they look with the glistening of the sun bouncing off them. But are they better than the UNC Football team’s icy blue helmets? I’m not so sure….

UNC Football shows of CHROME helmets with hints of blue

These helmets are actually CHROME with hints of blue in them. UNC Football will face Duke wearing these which should be a layup win for the Tar Heels and they’re poised to look damn good while winning:

A closer look at our helmet for this Saturday 👀🔥#CarolinaFootball 🏈 #UNCommon pic.twitter.com/69MtlPY0xO

I don’t know what they’re putting in the chrome to give it the tiniest powder blue tint but it is perfect. Would I want to see these in a 95-degree and sunny game against FSU or Miami in the Sunshine State? Definitely, not. But they work perfectly for October in North Carolina.

As for what people are saying about the helmets, it seems like UNC Football holds the edge

I won’t hit you with too many responses to these helmets. Primarily because this one right here sums up a lot of what people are saying:

Not a huge Carolina fan, but this is perhaps the best looking helmet I’ve ever seen.

Meanwhile, this is the most ‘liked’ tweet reply to the BYU helmet with the cougar:

Love the stretch Y. Don’t ever lose it. Cougar (whether sailor or this one) is fun on a t-shirt but as a helmet decal becomes a messy splotch from a distance.

While I’d still like to get both teams together for an arm wrestling competition it seems like UNC Football holds the edge in the people’s court. UNC Football first debuted chrome helmets back in October 2012 during a 43-35 win against NC State. So these aren’t unprecedented but they sure are incredible.