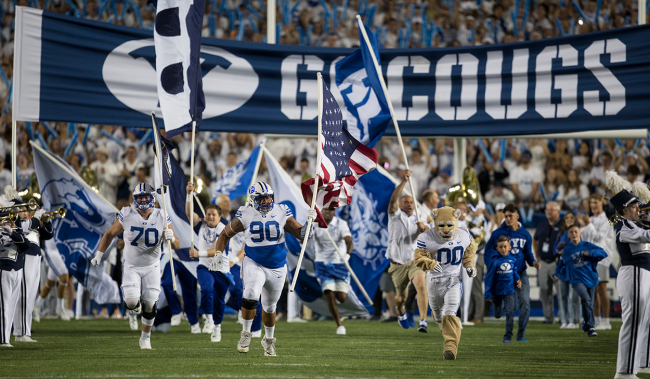 In today’s landscape of recruiting, there is a significant emphasis on visual media and unique content. Particularly within college football.

Every school across the country is competing to one-up the others. Just this spring, top-ranked quarterbacks have taken photos with the head coach’s puppy and sitting on top of a golden throne. A kicker went viral for his photo with a stuffed animal at Georgia. A four-star recruit took a photo with a fake rattlesnake atop his head. And that doesn’t even begin to scratch the surface of some of the crazy photoshoots that have unfolded in recent months.

Over the weekend, BYU put its hat in the ring for the most unique photoshoot with tight end recruit Walker Lyons.

Lyons, a four-star recruit, received an offer from the Cougars in 2020. Since then, he has racked up more than 25 offers from the likes of Alabama, Ohio State, Oregon, Oklahoma, and USC, among others.

From Folsom, California, Lyons released a top-six in February. BYU was on the list.

As the Class of 2023 recruit continues to decide on where to go to school, these next and past few months are crucial. He has been visiting all of his top choices.

BYU’s turn came over the weekend and Lyons took some wild photos in the program’s best uniforms. The team took him up into the mountains for the shoot and posed him with what appeared to be a full-sized, formally-alive, taxidermied Cougar— the school’s mascot.

Now, it seems a little strange that they would put him with a dead mascot, basically. But it made for some tremendous content nonetheless— particularly the “dunking” shot.

While most of the photos were pretty epic, one of them may have broken the BYU honor code. It was pretty sensual.

In a world where the bar for recruiting photoshoots is continuously raised, the Cougars — and the cougar — took it up a notch. Legendary stuff.