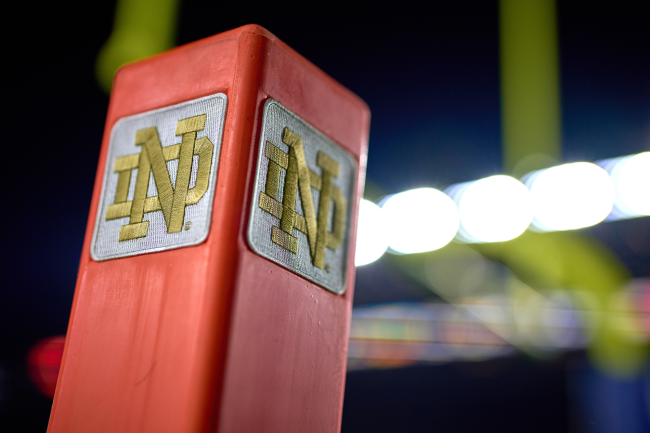 Five-star quarterback Dante Moore is the No. 3-ranked player at his position in the Class of 2023. The Detroit, Michigan-native has received more than 20 D-I offers, but his recruitment is down to Notre Dame, Michigan State, Oregon and LSU.

The Fighting Irish have been on Moore since very early on and appear to have a clear-cut lead over the other programs who have offered him. However, after Brian Kelly left for Louisiana, the Ducks have crept into the mix and the Tigers are making a push to flip him to the SEC.

More than likely, that is not going to happen. Moore is believed to be a heavy Notre Dame-lean.

Wherever he ends up, the 6-foot-2, 195-pound righty will be an immediate program-changing player.

Although he has until late December until he can officially sign, unless he waits until February 1, 2023, Moore can verbally commit whenever he wants. It is assumed, because it is the case with most quarterbacks, that he would like to come to a decision before his senior year of high school.

That decision will likely be to attend Notre Dame. The Irish and their new staff recently hosted Moore for a three-day visit over the weekend to try and sure-up his commitment.

When it comes to recruiting, there is an increased importance placed on visual media. In fact, Notre Dame held an incredible, old-school cathedral shoot earlier this year. Other examples include a recruit dunking on his own dad, a five-star quarterback taking pictures in a G-Wagon, Texas recruits wearing a ski mask and cowboy hat, and Lane Kiffin taking extremely icy pictures with recruits in his Aston Martin.

Social media is king these days and Moore literally sits in the throne. His photos in South Bend go absolutely crazy.

Pictured by himself and with head coach Marcus Freeman and offensive coordinator Tommy Reese, he is in-uniform, sitting on a throne of gold bars. The gold, of course, matches the historic, legendary Notre Dame gold domes. He also got to hold a Heisman Trophy.

Here is the result:

After having the red carpet rolled out for him like he did at Notre Dame, and taking the most epic visit photos of all-time, it’s hard to imagine Moore committing to play for anyone but the Irish. His photoshoot in South Bend is the leader in the clubhouse for greatest ever, they will be hard to top.