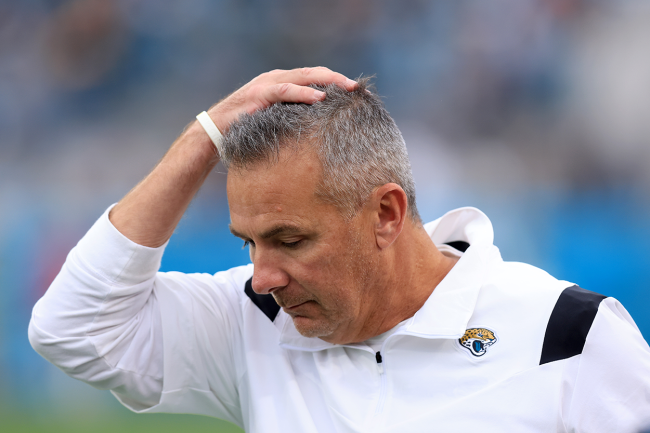 After Sunday’s 20-0 loss to the Titans, Urban Meyer has officially lost more games in one season with the Jaguars than he did in nine seasons with Utah and Ohio State. With the loss, Jacksonville is eliminated from the playoffs, but that might be the least of the organization’s concerns.

The year began with a splash when Meyer was caught on camera groping a younger woman at a bar in Ohio. And then he gave a shocking admission as to how bad his team really is in Week 13.

Since then, things have only gotten worse.

A report came out on Saturday that alleged three things about Jacksonville:

Despite all of the chaos and rumors that he could be replaced by one of the “losers” on his staff, Jacksonville appears to be staying the course and keeping Meyer as head coach.

After the loss to Tennessee on Sunday, he was visibly distraught while shaking hands with Mike Vrabel, who was on his staff at Ohio State.

And then, after the game, Meyer teed off. He is furious about the information that has been leaked from inside the organization. He even went so far as to say that if he finds out who it is that is leaking the information, he or she will be fired on the spot.

After the game, he was asked about how to fix what is wrong. Here is what he had to say:

Jaguars coach Urban Meyer on fixing what's wrong: "What's the answer? Starting leaking some information or nonsense? That's garbage. … If there is a source, then that source is unemployed. I mean, within seconds."

Needless to say, Meyer’s first year in Jacksonville has been a dumpster fire thus far.

Maybe, just maybe, if you don’t want things to leak about the turmoil within your organization, don’t cause or create turmoil? Just a thought.