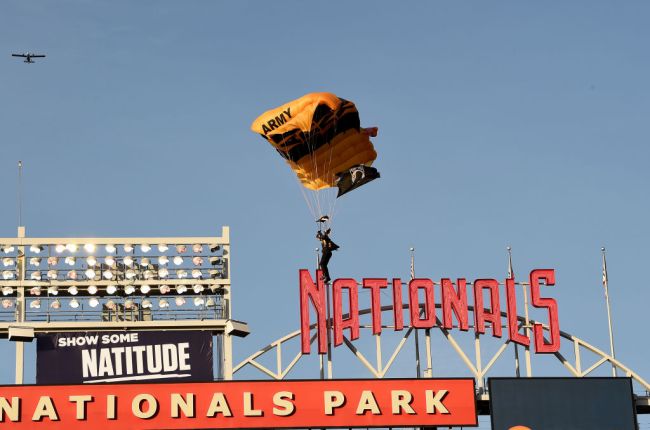 Earlier this afternoon, the US Capitol building was evacuated after Capitol Police said they were tracking an airplane that “posed a probable threat”. Shortly after, they ended the evacuation after they deemed there was no danger.

BREAKING: We’ve just been evacuated from the US Capitol because of reports of what what police are telling us is “aircraft intrusion”.

It turns out that the plane probably couldn’t have actually been much less dangerous. After the evacuation ended, it was reported that the “threat” was actually a plane carrying the Army Golden Knights parachute team and someone had forgotten to coordinate their jump into the Washington Nationals game, which took place about a mile away from the Capitol building.

The plane reportedly did not report taking off and didn’t have appropriate clearance according to two individuals familiar with the situation.

The Story seems to be that someone “forgot” to coordinate the Army Golden Knights parachute team jumping into a Nationals game. This caused the evacuation of the US Capital. This hurts my head. pic.twitter.com/JIBzVYW0w9

Forgetting to coordinate a parachute jump over the nation’s capital seems like a pretty big oversight. You’d think that “alert Capitol Police” would pretty high on the checklist of things you’d do before performing such a jump.

So, in conclusion, a poorly coordinated pregame parachute-drop into Nationals Park caused an urgent evacuation of the U.S. Capitol complex and about 15 minutes of utter panic in Washington. https://t.co/O5sicdZjnn

The game that they were parachuting into features the Washington Nationals taking on the Arizona Diamondbacks in the 3rd game of a 4 game series. The Nationals won the first two games to improve their record to 6-7, but are currently trailing early in the 3rd game.

This is probably the first time anybody has cared about Nationals baseball since Bryce Harper left for Philadelphia, but unfortunately it came at the expense of the US Capitol Building having to be evacuated.