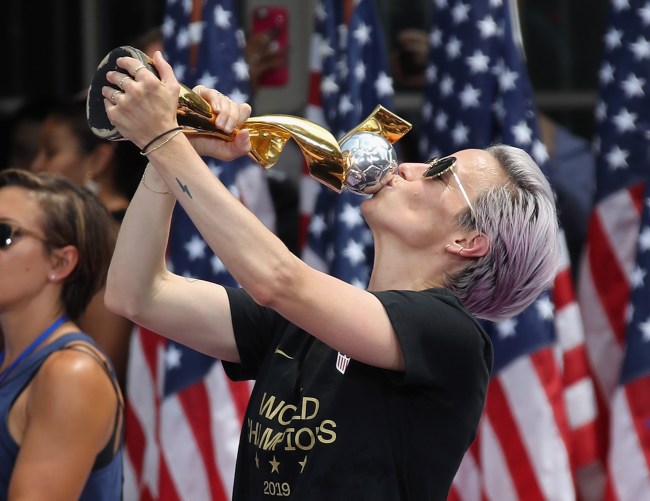 Over the weekend, U.S. Women’s National Team star Megan Rapinoe sat down with two Washington senators to advocate for equal pay in the wake of filing a gender discrimination lawsuit against the U.S. Soccer Federation in March.

The lawsuit states that they should have be paid as much as their male colleagues, especially seeing as they have been wildly more successful than the Men’s National Team. The suit also takes issue with unequal promotion, playing conditions and travel conditions.

The lawsuit also pointed out the federation paid the men’s team $5.375 million in World Cup bonuses in 2014 compared to the $1.725 million the women’s team received in 2015. The women won the World Cup that year, while the men were eliminated in the round of 16. [via Bleacher Report]

Megan Rapinoe on equal pay: "To be honest, I think everybody's ready for it. It's time. We've put this whole movement on our back and done so so beautifully, the entire team." #USWNT pic.twitter.com/a7huYL2Gjr

In response to the lawsuit, the President of the U.S. Soccer Federation says he has proof that the women make significantly more than their male counterparts despite bringing in way less money.

“U.S. Soccer has, over the past decade, paid our Women’s National Team more than our Men’s National Team in salaries and game bonuses, and we continue to make unprecedented investments in our women’s program.”

“From 2010 through 2018, U.S. Soccer paid our women $34.1 million in salaries and game bonuses and we paid our men $26.4 million — not counting the significant additional value of various benefits that our women’s players receive but which our men do not.”

Cordeiro also argues that any discrepancy in pay in not gender-driven, but due to a litany of factors including different pay structures under respective collective bargaining agreements.

Women are also reportedly earning a guaranteed salary that men do not. Under the women’s CBA, U.S. Soccer pays each woman a base salary of $100,000 per year, whereas the men have no guaranteed salary and are only paid for the training camps they attend and the games they play, plus game bonuses. U.S. Soccer also pays women $67.500-$72,500 to play in the National Women’s Soccer League, whereas they do not pay men for playing in the MLS or any other professional league. In total, U.S. Soccer guarantees Women’s National Team Players who also play in the NWSL a base salary of $167,500-$172,500 per year, sans game and tournament bonuses.

Molly Levinson, a spokesperson for the USWNT players, claims that Cordeiro’s accounting is downright disingenuous.

“The numbers the USSF uses are utterly false, which, among other things, inappropriately include the NWSL salaries of the players to inflate the women’s players’ compensation. Any apples-to-apples comparison shows that the men earn far more than the women.”

“The USSF fact sheet is not a ‘clarification.’ It is a ruse,” Levinson said. “Here is what they cannot deny: For every game a man plays on the MNT, he makes a higher base salary payment than a woman on the WNT. For every comparable win or tie, his bonus is higher. That is the very definition of gender discrimination. For the USSF to believe otherwise is disheartening, but it only increases our determination to obtain true equal pay. If the USSF cannot agree to this at the upcoming mediation, we will see them in the court of law and the court of public opinion.”

It appears that both sides are capable of massaging the numbers seeing as due to different CBAs, men’s players make money based on matches and performances while the members of the women’s team have a base salary.