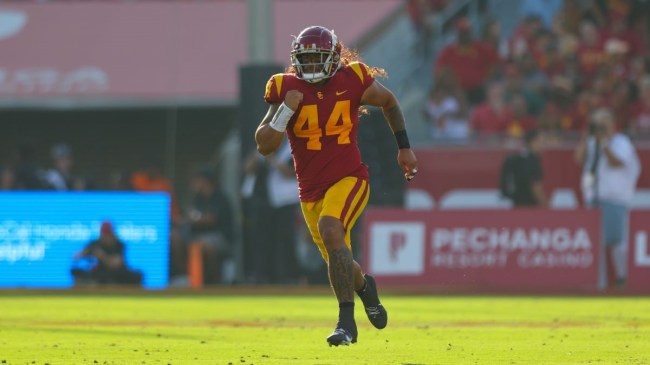 Lincoln Riley’s first season as the head coach of the USC Trojans has been an unqualified success up to this point. The Trojans went a shocking 4-8 a year ago under Clay Helton and interim Donte Williams. This season, USC is 6-1 and ranked No. 10 in the AP Top 25. The Trojans could well still reach the College Football Playoff for the first time should they win out.

Riley’s high-powered offense gets much of the plaudits, and with good reason. Led by star QB Caleb Williams and Biletnikoff Award winner Jordan Addison, the Trojans average 40.4 points per game.

But the USC defense has been a pleasant surprise. Alex Grinch’s unit has produced 16 turnovers this season and the Trojans lead the nation in turnover margin at plus-15. Junior linebacker Tuasivi Nomura is one of the emotional leaders of that defense. And it’s not hard to see why after hearing Riley’s latest comments about the Corona, California native.

Nomura’s stats aren’t eye-popping. He’s notched just 15 tackles through six games thus far in 2022. But it’s not hard to see why he’s so well-respected by his teams. Especially after hearing about the brutal injury he played through earlier in the season.

Lincoln Riley revealed that LB Tuasivi Nomura sustained a compound fracture on a finger during a game earlier this season, didn’t tell anyone and played three more plays with the bone sticking out of his finger before telling anyone. #USC

Riley said that Nomura suffered a compound fracture of his finger earlier in the year. But rather than leave the game, he played three more plays with a bone protruding from his finger.

“(It) Tells you about his toughness and how much he wants to do well for this team,” Riley said of the story.

Fans and media across the country were more than a little grossed out by the injury.

"Hey, what's that sticking out of our finger?"

"Your bone isn't sticking out of your finger?"

"OK. So what do you wanna do tonight?"

Personally speaking, I understand that sort of toughness and commitment. I recently chewed a fingernail watching the Phillies clinch the NLCS and didn’t even put a bandaid on it until after the final out.

I guess we athletes are just built different.