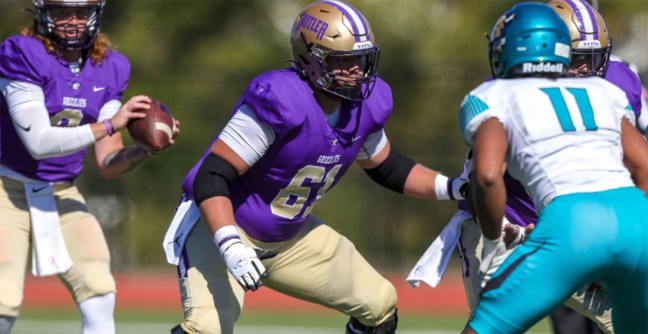 USC football added some extra depth to its offensive line earlier this offseason when JUCO transfer Cooper Lovelace committed to the Trojans with three years of eligibility remaining. It was an exciting get for Lincoln Riley and his staff.

Lovelace was one of the top JUCO linemen on the market after spending his first two years at Butler Community College in Kansas. He chose to play for the Trojans over offers from Florida, Iowa State, Kansas, Oklahoma State, and others.

As for his playing style, Lovelace is a big dude who likes to get his hands on defenders and shake them around.

“I play violent football, that’s the best way to put it. And there’s nothing I want to do more than win,” he told USCfootball.com.

Here are the highlights from Cooper Lovelace’s final season on the JUCO level before committing to USC:

Lovelace is particularly interesting because he is new to the sport. He has only played three years of football— two on the JUCO level and one in high school.

Today, he stands 6-foot-5, 320 pounds. Lovelace has experience playing both tackle and guard and will join an offensive line in Los Angeles that has a need for depth as well as the ability for players to step up and fill holes as the season goes on.

He is the most flexible lineman in college football. Literally.

I have had a few coaches the last couple weeks ask what do I mean by “most flexible big man?”

Once he gets on a D-1 weight and strength training plan, he will likely play closer to 325 pounds of muscle and has three seasons to develop into a bonafide starter. With Lovelace on the roster, USC can now boast that it has the most flexible big man in college football.

He can do a full split with utmost ease, which is absolutely mind-blowing at his size.

While the Trojans seek to turn the corner toward consistent national relevance in 2022, they got a good one in Lovelace!