USFL Reveals The Names Of All 8 Teams, Fans React To Their Old School Significance 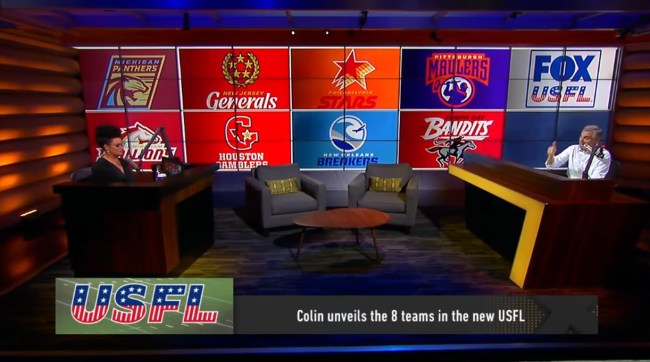 The Herd With Colin Cowherd

The USFL, on Monday, announced the names for all eight of its teams for the upcoming reboot of the football league in the spring of 2022.

The reveal was made on The Herd With Colin Cowherd, getting an early start on displaying some of the synergy the USFL will benefit from by being owned by Fox Sports.

As previously announced, the USFL will initially be split into two divisions of four teams each.

Those divisions will be the Michigan Panthers, New Jersey Generals, Philadelphia Stars and Pittsburgh Maulers in the North, and the Birmingham Stallions, Houston Gamblers, New Orleans Breakers and Tampa Bay Bandits in the South.

All eight of those team names were used in the original iteration of the United States Football League from 1983 through 1985 as well as the cities where they were located except for the Breakers who originally played in Boston.

Each team will play a 10 game schedule, with teams in the same division playing each other twice and teams in the other division once.

All eight teams will play in one neutral location “which will be announced soon.”

“These eight teams form the core of our initial league membership and will represent an exciting brand of professional football coming this spring,” Brian Woods, USFL president of football operations, said in a statement. “We look forward to the start of our inaugural season.”

We are the USFL 🏈

The 2022 USFL regular season will begin in mid-April and run through mid-June, with games being played on both Saturday and Sunday, along with special broadcasts on specific Fridays and Mondays.

Many fans appreciated the nostalgia the USFL’s use of the old school team names create. Others, not so much. And many, well, they just made jokes.

I remember the original. Attended a game or two back in the day. Hopefully has a good run. Will def check it out.

Stars were the best team in the league. So happy to see them back in Philly

The western half of the United States will get nothing, and like it.

I would have liked these Breakers instead #orlando #USFL pic.twitter.com/HsZcOM0eMN

Lest we forget the @MIPanthersUSFL are the “1983 USFL Champion Michigan Panthers.”

Screenshot to find out who you should root for! pic.twitter.com/TkzX4O6GhV