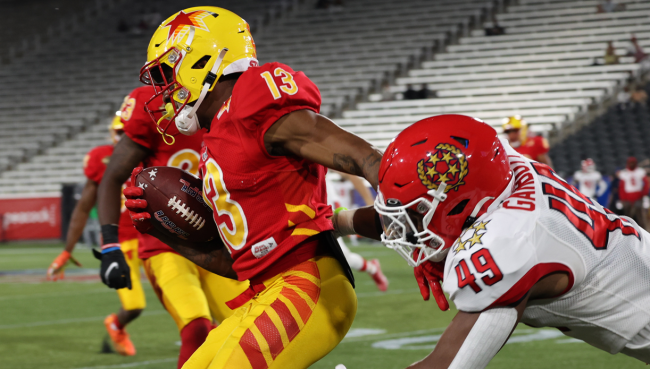 As is the case with any new football league, the TV ratings for the USFL fell off dramatically from Week 1 to Week 2.

While this was certainly some cause for concern, the Week 3 TV ratings for the USFL were almost equally as encouraging.

In Week 1, the USFL averaged more than 1.5 million viewers for the four games played in Birmingham. In Week 2, the USFL’s four games averaged just 661,000 viewers, or a 57% drop from the Week 1 viewership numbers.

However, in Week 3, with the NFL Draft staring the USFL right in the face, the fledgling football league was able to actually improve its numbers.

According to Sports TV Ratings on Twitter, the USFL had an average audience of 825,000 viewers for the four games played on Saturday and Sunday.

In fact, the Saturday night game between the hometown Birmingham Stallions and New Orleans Breakers had an average viewership of 1.114 million.

By comparison, Sports Business Journal states that the USFL’s Week 3 TV ratings are “are on par with Sunday Night Baseball, the Premier League and UFC.”

This is good news for the league’s future, according to Mike Mulvihill, Fox Sports’ executive vice president, head of strategy and analytics.

“The USFL has to establish that it belongs in the same category as sports that have been part of the spring calendar for many years,” Mulvihill told Sports Business Journal. “It’s all about trying to prove that the USFL is in the same class as sports that are going out there and double or tripling their rights deals.”

On the face of it, he’s not wrong. Formula 1, one of the USFL’s competitors for viewership in the spring, is seeking $75 million per year for the rights to its broadcasts and the April 24 race averaged 1.003 million viewers on ESPN – numbers very similar to some USFL games thus far.

Also, NBC paid $450 million per year for the rights to broadcast the Premier League and on April 23 they averaged 631,000 viewers – again similar to the USFL.

If the USFL can maintain its viewership numbers for balance of the 10 game schedule then there is certainly hope it will avoid the fates of the Alliance of American Football and the second iteration of the XFL and actually make it to year two.