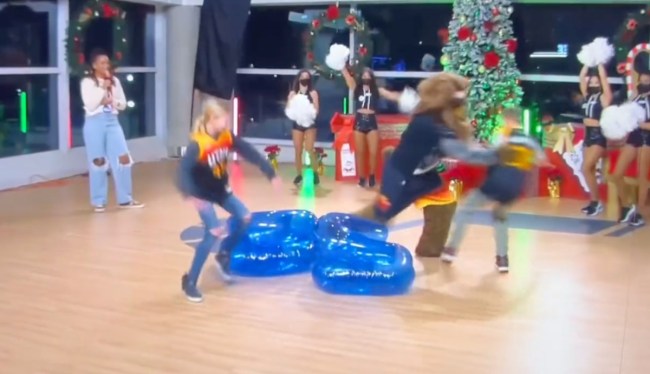 Musical chairs is one of those games that never disappoints. There’s a reason you’ve seen the game played at just about every minor league baseball game you’ve ever been to. What makes the game so good is that you immediately have a cheering interest in one of the contestants and you also have a villain that takes things far too seriously.

The Utah Jazz mascot is that villain, apparently.

The Jazz welcomed three kids to join Jazz Bear for a friendly game of musical chairs, but the person stuffed in the mascot suit wasn’t there to play games, he was there to win.

Jazz Bear didn’t politely shove kids out of the way, who threw them across the room so hard they left the entire frame of the video.

Jazz Bear just ruined these kids during a game of musical chairs pic.twitter.com/vXtKo83e2z

The first shove was playful, but the second kid hit the ground with some force.

Fun fact: I broke both of my wrists falling backward falling just like the second kid did trying to catch myself.

I’m going to go ahead and say that Jazz Bear got a talking to after the game of musical chairs was over.