Vegas Sportsbooks Got Absolutely Destroyed Because 69% Of Bettors Took The Over On Chiefs Vs. Rams 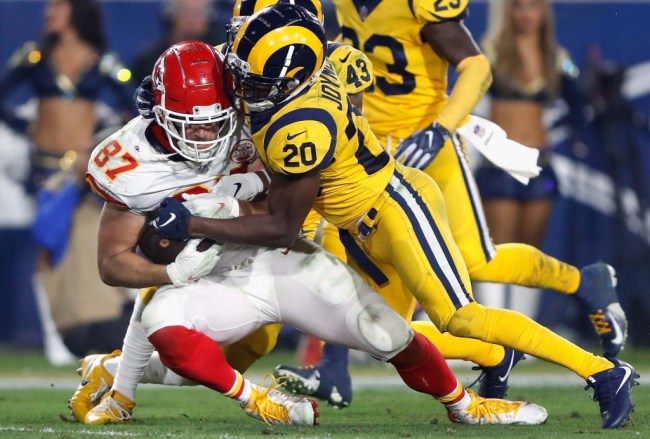 The most recent installment of Monday Night Football featured what was easily the most hyped matchup of the year, with both the Chiefs and the Rams sporting 9-1 records heading into a game that promised to be an offensive shootout.

It’s safe to say it did not disappoint.

Fans around the United States (and a few at a Buffalo Wild Wings in Mexico City) were treated to quite the contest, where the Rams eventually took home the victory by a score of 54-51.

It was the first game in NFL history where both teams tallied more than 50 points thanks largely to the 14 total touchdowns that were scored— an achievement that was responsible for my favorite statistical takeaway of the night.

Rams-Chiefs produced more touchdowns than the Bills have all season https://t.co/LDGiBBfA7Y

I’m sorry, Buffalo. I hate to hate on you but you guys just make it too easy.

As I mentioned before, it was pretty evident that the defense here was going to be about as effective as a guy who decides to represent himself in court.

Vegas agreed, as the over/under was set at an abnormally high 64, which ESPN said was the highest number for an NFL game since at least 1986.

As you may or may not know, 105 is a bigger number than 64 so anyone who hammered the over got to breathe a sigh of relief before the third quarter had even ended.

According to ESPN, the very nice 69% of bettors who took the over had an equally nice night, but that wasn’t the case for the Las Vegas sportsbooks handling the wagers.

According to Darren Rovell, a man who was definitely the treasurer of his student government in high school, William Hill lost at least a couple of million on the game and other sportsbooks presumably suffered similar losses.

William Hill, which has 108 sportsbooks in Nevada, say tonight's game represented a "healthy seven-figure loss" for them.

My heart goes out to all of them during these difficult times. They’ve had a rough couple of weeks.