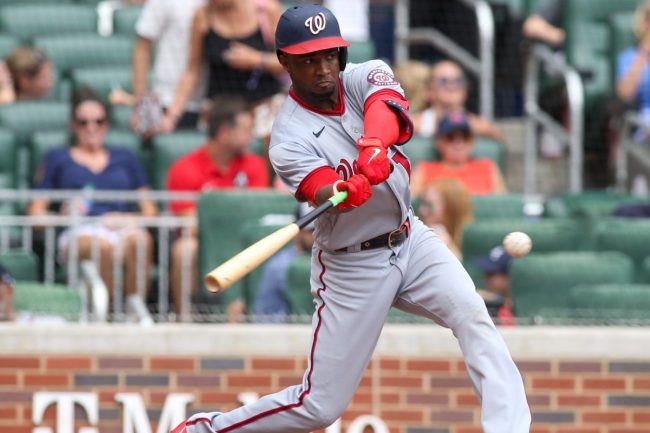 Madison Bumgarner called Victor Robles a clown after the slugger smacked a home run in Saturday’s matchup between the Nationals and Diamondbacks. Robles took a little extra to watch his moonshot, which didn’t sit well with the Arizona flamethrower.

The blast took place late in the game with the Diamondbacks holding a commanding lead. That didn’t stop Robles from admiring his shot.

Victor Robles stole all the bases with this blast 💥 pic.twitter.com/omkZM68OzX

Here’s what Bumgarner had to say last night.

The pitcher admits that he’s the “old grumpy guy” in the clubhouse, but he doesn’t like when players pimp home runs. Robles had the absolute best response when Sunday rolled around, though.

Victor Robles responds after being called a clown

Victor Robles had an immediate response upon hearing Bumgarner’s clown comments, saying that the pitcher is able to celebrate when he’s playing well. Why can’t hitters?

“When he’s pitching well, he’s able to celebrate and do what he likes to do. It seems like he calls everybody a clown that actually has a big hit or home run against him.”

But the best reaction came on Sunday when Robles wore a red clown nose to the afternoon showdown. It was the perfect answer to the pitcher’s name calling the night before.

The outfielder followed things up by getting a hit in his first at-bat in Sunday’s matchup. The only way it could’ve been better is if Robles had worn the clown nose in the batter’s box.