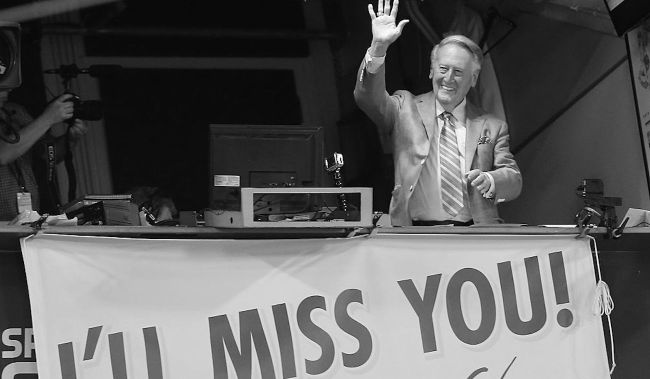 Legendary Los Angeles Dodgers broadcaster Vin Scully has passed away at the age of 94 years old. Scully ws born in the Bronx, New York, on November 29, 1927. By the time he was 23 years old, he was calling baseball games for the Brooklyn Dodgers and remained with the team until 2016.

Scully, who began calling games for the then-Brooklyn Dodgers in the year 1949, undoubtedly established himself as the most iconic voice in the history of Major League Baseball during his astounding 67-year-long broadcasting career.

He didn’t only call games for the Dodgers franchise, though, as Scully called various nationally-televised football and golf events for CBS Sports from 1975 to 1982 and served as NBC Sports’ lead baseball announcer from 1983 to 1989.

Given Scully’s status in the history of MLB, baseball fans of all ages and from all corners of the country took to social media to mourn his passing and celebrate his iconic life and career.

Baseball fans remember the life of Vin Scully, who passed away at 94 years old

There will never be another Vin Scully. You will be forever missed. 🎙💙 pic.twitter.com/WyTmXsati5

Vin Scully on the call.

The best to ever do it. RIP pic.twitter.com/bPYHFxbjmo

The Dodgers just announced Vin Scully has passed away. An unbelievable loss to Dodgers organization and the baseball world.

Rest In Peace, Vin. You will be missed ♥️ pic.twitter.com/SpGeWShLlK

As an East Coast baseball fan, I associated Vin Scully with the end of the night — his broadcasts were the ones I chose to close out the evening from the West Coast. Lots of times his voice was the last I heard before I fell asleep. And he always made staying up feel worthwhile.

Vin Scully got a seat next to Francis Dayle Hearn

As long as you live keep smiling, because it brightens everybody's day. -Vin Scully pic.twitter.com/5R0xxpA7Xb

You can’t tell the story of baseball without Vin Scully pic.twitter.com/PBq5el6vwB

The voice of our city. pic.twitter.com/gR5DlMmbQI

Vin Scully is the greatest storytelling broadcaster I have ever heard. The list of big games and big moments is unmatched. What a legend.
I’ll miss his Twitter account too. Rest In Peace Vin! 🙏 💙 pic.twitter.com/XMVSOjPD1S

I’ve always appreciated good storytelling and an ability to go off-topic. Vin Scully was a master at both. Rest In Peace, sir 🙏 https://t.co/8Q6vU9OdtY

I had the privilege of having a career in baseball because of Vin Scully.

Endless summer nights in front of the TV, listening to Vin taught me the art of storytelling and baseball.

Had a lot of nights falling asleep to Vin Scully calling the late game, learning a ton about baseball and about storytelling along the way. An absolute legend.

Our thoughts are with Mr. Scully’s friends, family, and various loved ones during this difficult time. May he rest in peace.