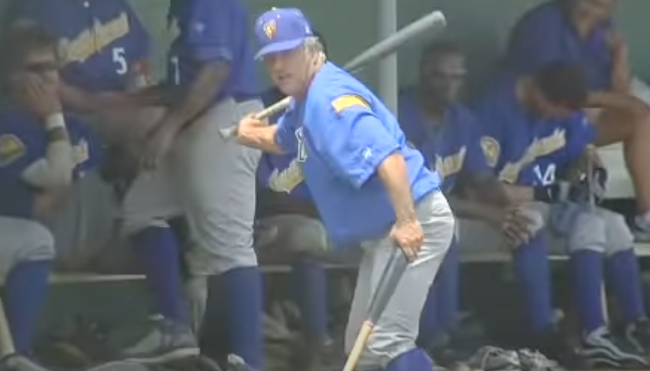 On Wednesday night, Nationals manager Davey Martinez treated us to a temper tantrum for the ages when he was tossed out of a game for arguing a call and subsequently hit first base with a Batista Bomb after prying it out of the dirt.

Davey Martinez has had enough with these umpires pic.twitter.com/6MVQEEbWTv

Even if you’re not a baseball fan, it’s hard not to derive an extreme amount of enjoyment from incidents like this. As far as I’m concerned, watching guys on the diamond erupt with the fury of Mount Vesuvius before raining their fury (and, more often than not, spittle) upon an umpire truly never gets old.

I know this because the outburst Martinez treated us to resulted in me spending far too long on YouTube rewatching clips of some of the best ejection-related freakouts the baseball world has ever seen—including Lloyd McClendon’s first base heist, which you have to imagine Davey drew some inspiration from.

McClendon deserves a spot on the Mount Rushmore of ejected managers, as he’s the kind of guy who did not step off of the field without getting his money’s worth after getting thrown out.

While tumbling down this rabbit hole, I also encountered a couple of truly legendary clips I’m ashamed to admit I’d almost forgotten about entirely. That includes the masterclass Mississippi Braves manager Phil Wellman conducted during a minor league game in 2007, which not only featured some base-tossing but the truly ingenious use of a rosin bag as a prop.

However, I can safely say there is one man who still sits upon a throne he may never cede: Wally Backman.

After being picked by the Mets in the first round of the MLB Draft in 1980, Backman bounced around the league before playing his final season in 1993. A little over a decade later, he was hired as the manager of the Diamondbacks but saw his career derailed after just four games thanks to multiple exposés concerning multiple run-ins with law enforcement as well as the IRS.

In 2007, his redemption tour officially kicked off when he took the helm for the South Georgia Peanuts of the decidedly unglamorous South Coast League. The comeback was chronicled in the documentary Playing for Peanuts, and we should all be grateful there was a camera crew following him around, as they were responsible for capturing what I believe remains the greatest ejection freakout in the history of baseball.

What makes this stand out above the rest? Well, there’s the fact that:

It’s also appropriate he capped off the blowup as he did, as I can’t think of a better way to describe Backman during this moment than comparing him to a drunk dude who’s been kicked out of the same bar 17 times; you just know the ump who keeps saying “Wally” while attempting to play peacekeeper has been in the exact same situation before and has learned the best thing to do is just let him get it all out of his system.

I’d like to thank Davey Martinez for bringing this clip back into my life, and while I commend him for his efforts on Wednesday, Wally Backman is still responsible for the greatest baseball freakout of all time.