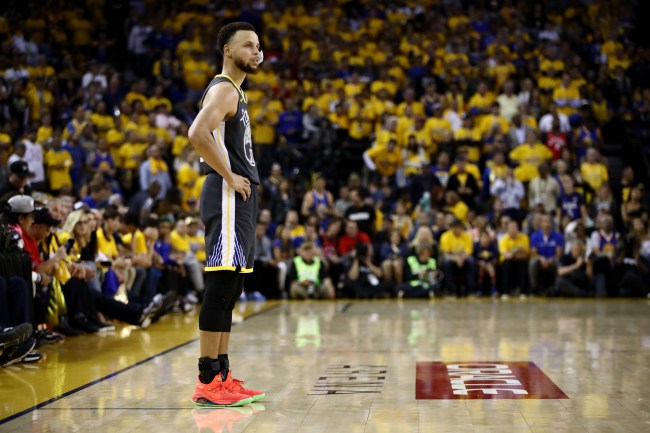 Last month, when Andre Iguodala was still a member of the Golden State Warriors, he took a jab at the white collar fanbase inside Oracle Arena. The former Finals MVP claimed that the success of the Warriors has ‘priced our real fans out,’ with only wealthy Silicon Valley nerds able to purchase tickets.

A blue collar Warriors fan named Trevor Laub wasn’t going to let his financial situation stop him from seeing one of the greatest basketball dynasties in modern times, despite the team selling out every home game for the last six years.

The demand is so high for Warriors games that the team began selling tickets that allowed fans inside the stadium, but without a seat.

This unorthodox method provided Laub with an opportunity to scam, resulting in the Bay Area man attending 32 games last year, 29 of them courtside.

To enter the building, he used the barcode from the ticket that only allowed him access into the building, and walked down to the courtside seat that his photoshop ticket listed, simply showing ushers a photo of the ticket. Laub claims that there was additional barcode scanning for the best seats in the house. Baffling.

Laub’s scheme would not be possible without the biggest (and richest) fake fan in all of sports. In the description of the video below, which documents in depth how the scheme unfolded, Laub wrote: “Shout out to the REAL MVP the rich mf’er who had season tickets to the 2 seats i sat in every game and only showed up to like 4 games the entire season I APPRECIATE YOU!”

I would call this dude an idiot for revealing his perfect scheme to the world, but seeing as the Warriors are moving to San Francisco next year and likely doing away with general admission, going viral is a nice cherry on the cake after a good run.